Sometimes, you just need to go big or go home. Maybe you like to overclock or you’re like me and run a high wattage AMD FX chip. For these scenarios, large air coolers or water cooling kits are the only effective options.

For those interested in air cooling, Noctua has multiple large coolers for just this use case. Today we’re featuring the NH-D15S. This twin tower heatsink is rated by the manufacturer as being able to cope with a 220-watt TDP which is enough to handle the “just plain crazy” AMD FX-9590.

I mentioned performance as a prime driver for serious cooling, but the other side to this quest is one that more of our readers will be familiar with – that is, the hunt for quiet performance. A larger cooler like this can perform admirably at slower (and thus quieter) fan speeds when compared to smaller units. Although it’s usually difficult to build a small form factor system around a large heatsink, the sacrifices and investment may be worth it to those that desire the quietest operation possible.

With all of this in mind, let’s see how the NH-D15S performs. 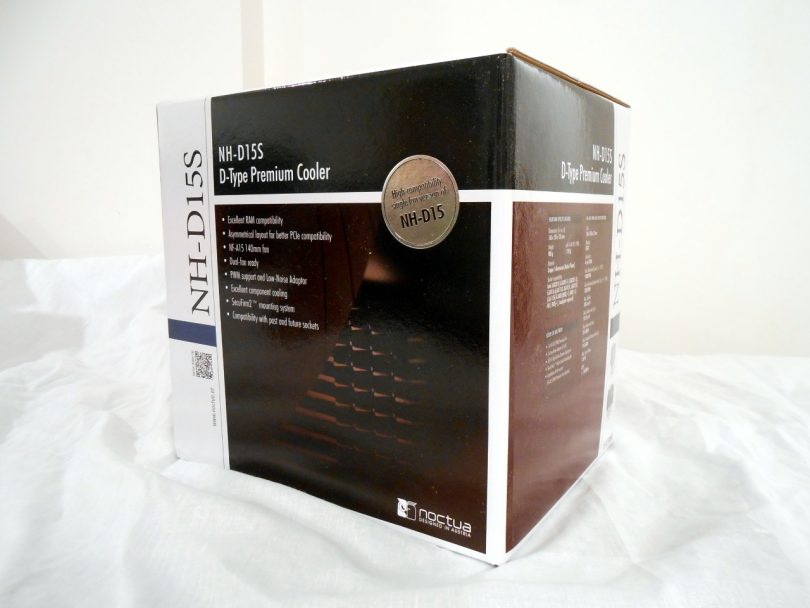 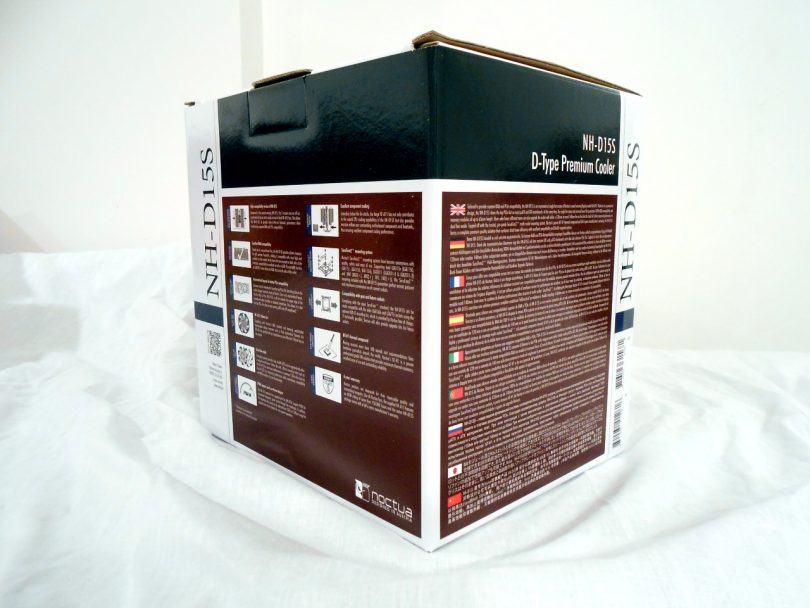 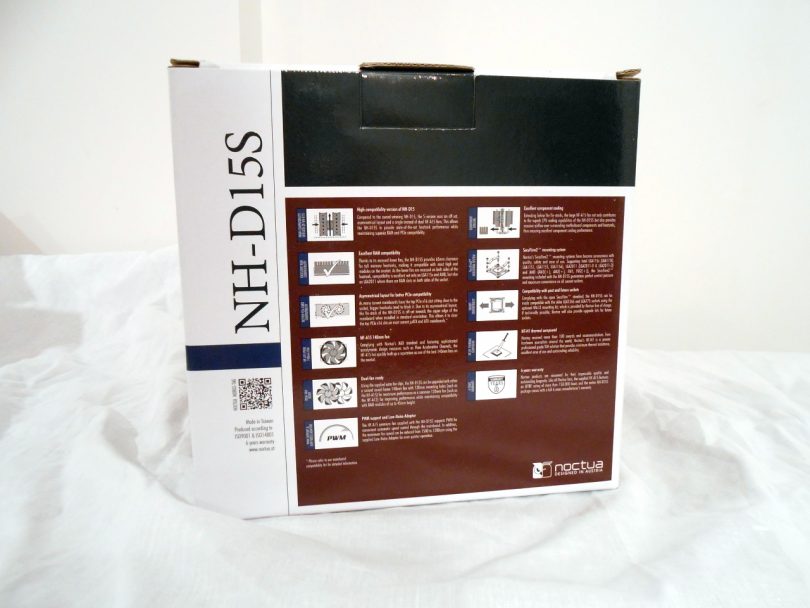 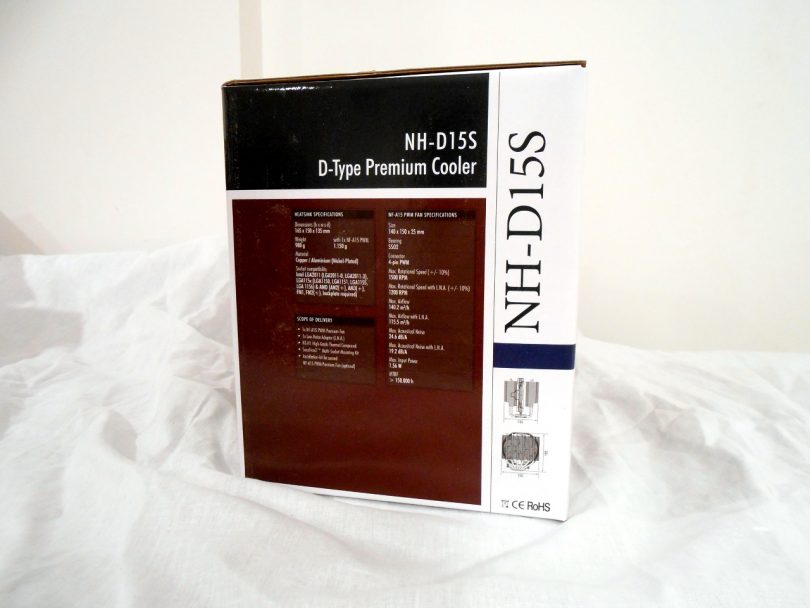 The usual Noctua packaging style is evident here, it’s something we’ve commented on a few times before, and it bodes well for a quality product. 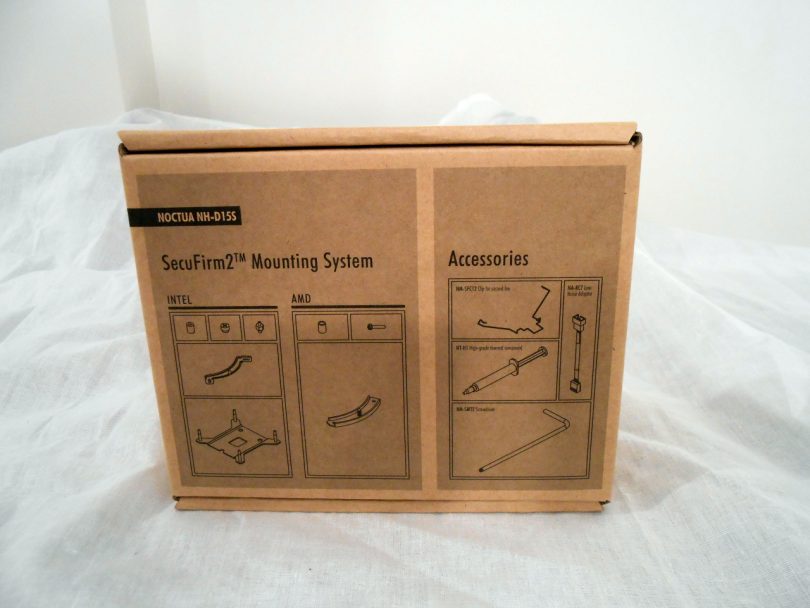 Included is a full complement of SecuFirm2 mounting hardware as well as an extra pair of fan mounting clips. We’ll see more about how these come into play below. 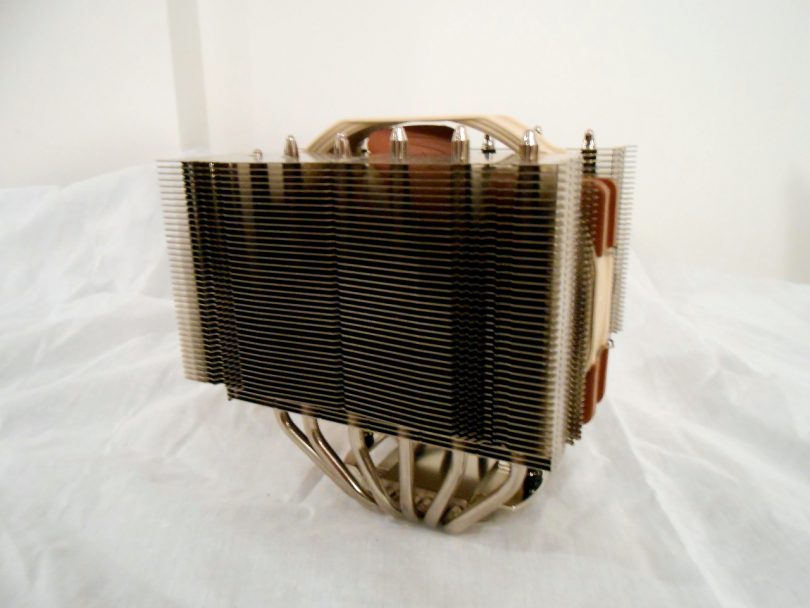 This thing is yuuuge! Measuring in at 165mm high, this cooler will certainly push the limits of most mass-produced SFF cases with remotely traditional layouts. This cooler would definitely shine in a well-designed scratch-built SFF system, however.

Unlike the NH-D15, the NH-D15S comes with only a single fan bundled. Both coolers share the same NF-A15 PWM fan. At first glance the NH-D15S cooler does look to be identical to the older product, however the big difference is in how Noctua has approached compatibility issues with such a big heatsink. 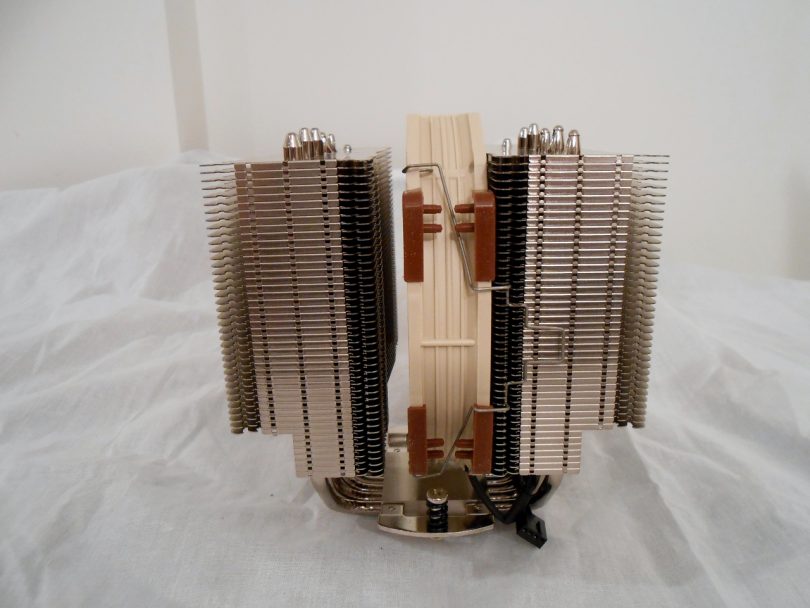 From the side, the cooler does look like the NH-D15. This is good news though since it should mean that the newer NH-D15S performs similarly. 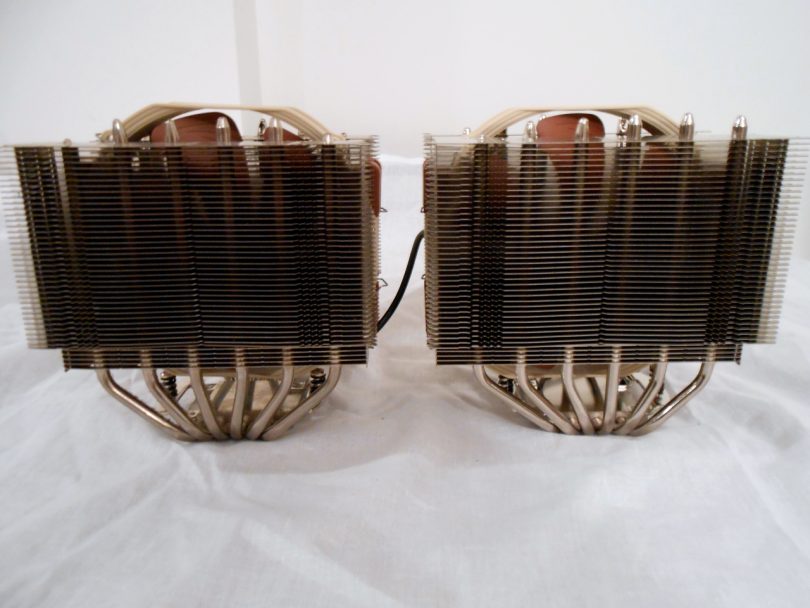 A family reunion! To the left is the NH-D15 and to the right is the NH-D15S. The fins on the NH-D15S have shifted slightly to the left, which reveals Noctua’s aim with this product – improved compatibility. Noctua has designed this cooler to ensure that it does not conflict with the top PCIe slot on most ATX (boo!) and mATX (yay!) boards.

mITX compatibility is not guaranteed, but that is something that those in the SFF world understand well. The substantially smaller footprint of the standard really does complicate things from a CPU cooling perspective. 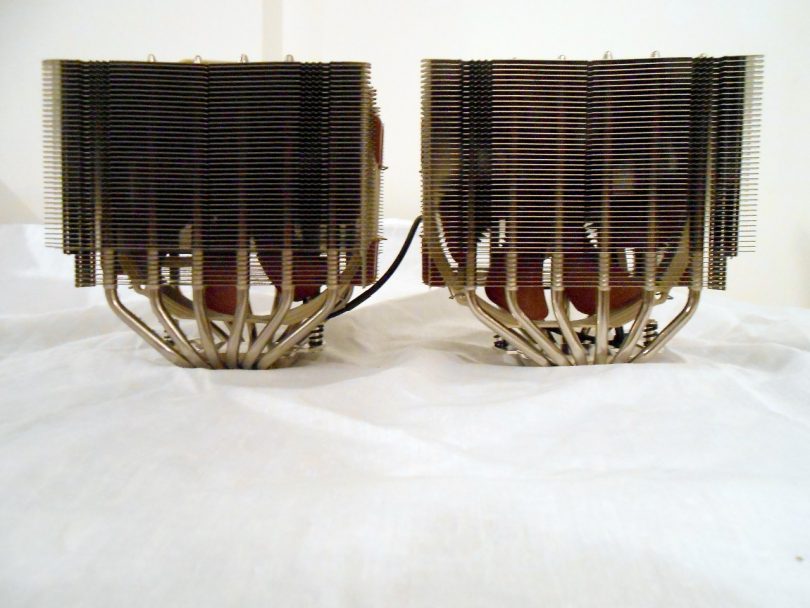 This lower shot provides a better view of the redesign. The recesses in the fins for RAM compatibility haven’t changed in the redesign, which is great. This recess enables the use of RAM modules up to 65mm in height.

The recesses are located on both sides which ensures that Socket 2011 users aren’t left out. 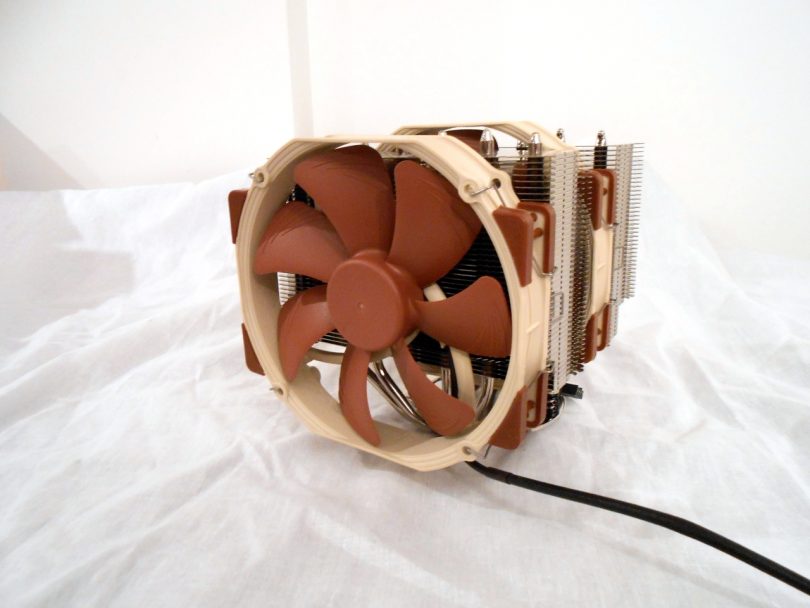 Two fans mounted. The NH-D15S includes a second set of fan clips, but not a second fan. If you decide to purchase your own second fan, it can be mounted on the front or back depending on your particular system.

The fans can also be raised to clear VRM heatsinks, rear IO, or taller memory. 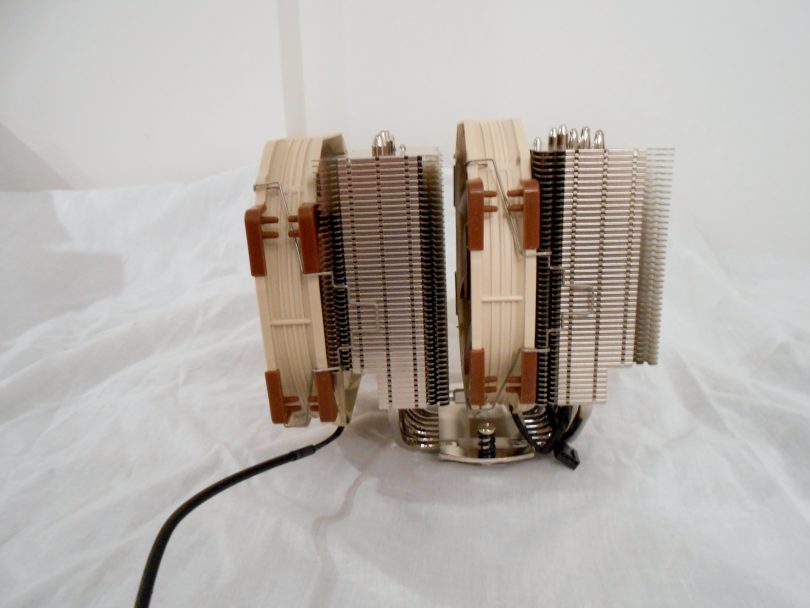 With two fans, the cooler has become noticeably larger. Dual-fan compatibility with your SFF system is not guaranteed. Some systems might only work with a single fan installed. 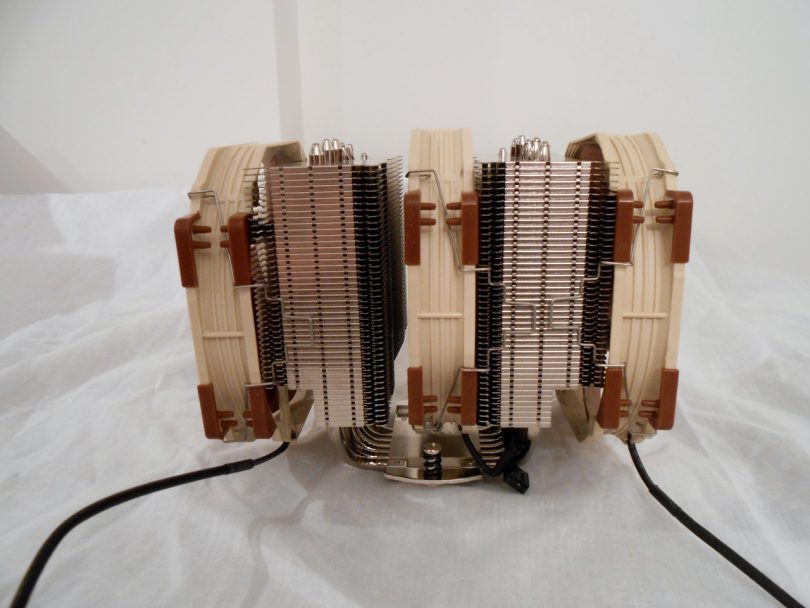 Three fans? Madness. I pulled a fan off my personal NH-D15 for this shot. In this mode the cooler is 185mm deep!

(Would this actually improve performance much? We don’t know, but it certainly looks like it would, right?) 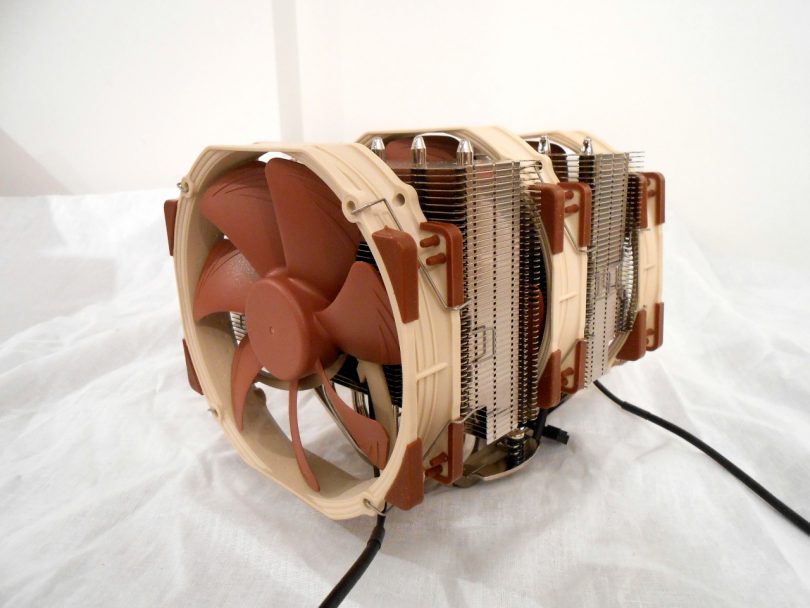 This may just be too big! Let’s take a look at what this looks like on a mITX board.

Noctua’s aim for the NH-D15S was improved compatibility so let’s see if this holds true. 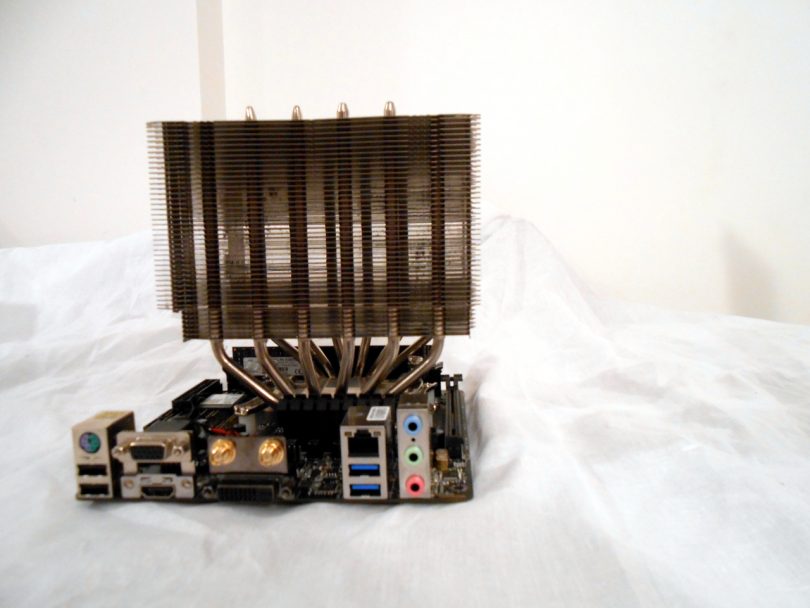 I mounted my NH-D15 (the old unit, not the NH-D15S being reviewed today) to the SFFn thermal test board. Unfortunately the cooler completely blocks the PCIe slot.

We also attempted to use a low profile card with no success. I hope you’ve got a really good iGPU. 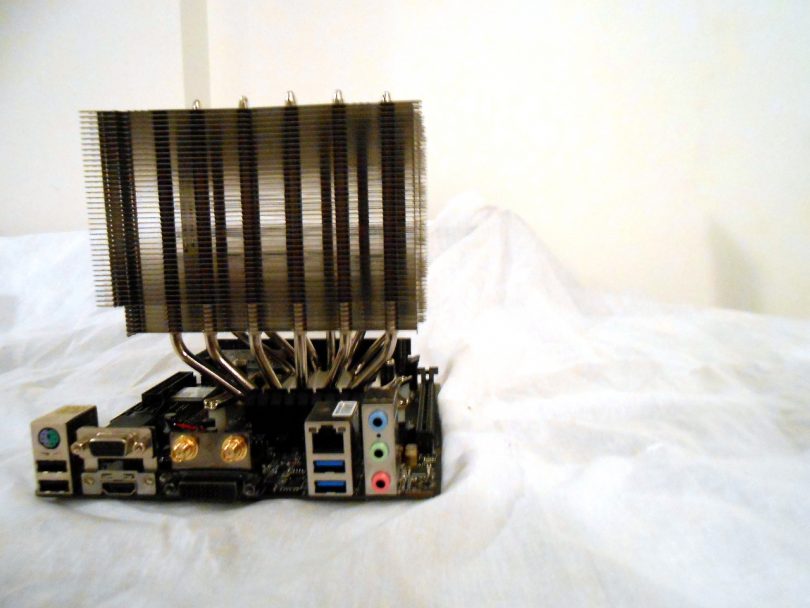 The NH-D15S is noticeably different, however! It looks like the goal of improved compatibility was achieved… or, was it? 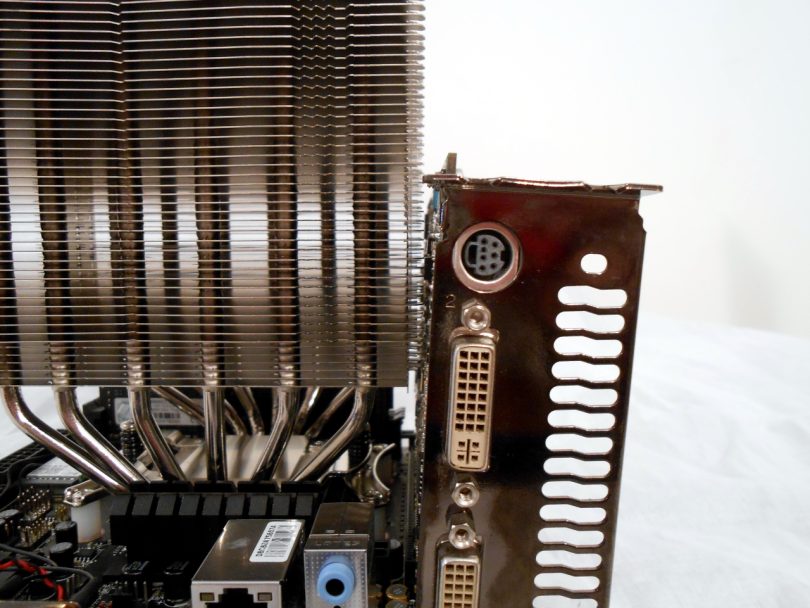 Not quite. However, Noctua never promised mITX compatibility so this isn’t a huge surprise. On mITX motherboards where the CPU socket is located further away from the expansion slot, this cooler is still a valid option. 5mm is all that it would take on our board to ensure the expansion card was able to be used. With careful motherboard selection, you will be able to use this cooler with no problems at all. Be sure to do extra research and check for yourself if you’re in the market for coolers like this. 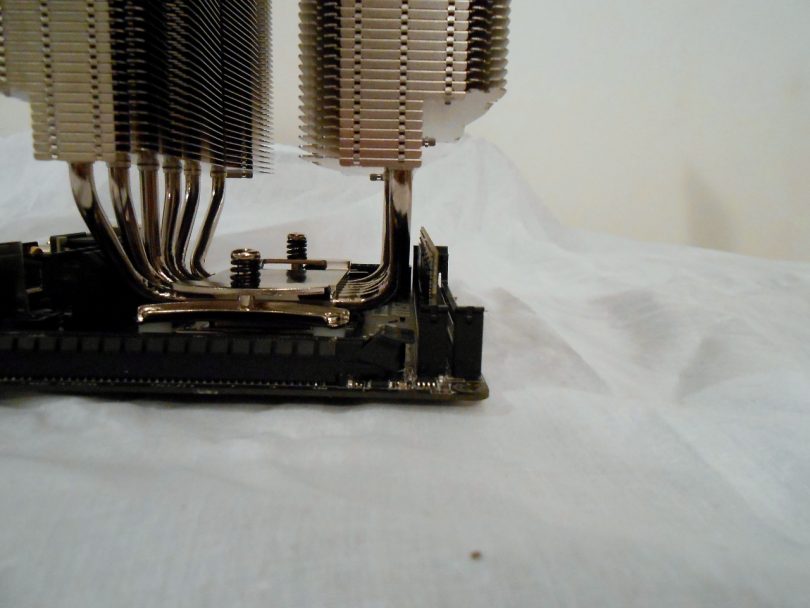 The 65mm RAM clearance is evident. 65mm is huge! The DIMM you see here is a regular height model without heatsinks and it doesn’t even come close to conflicting with the fins. 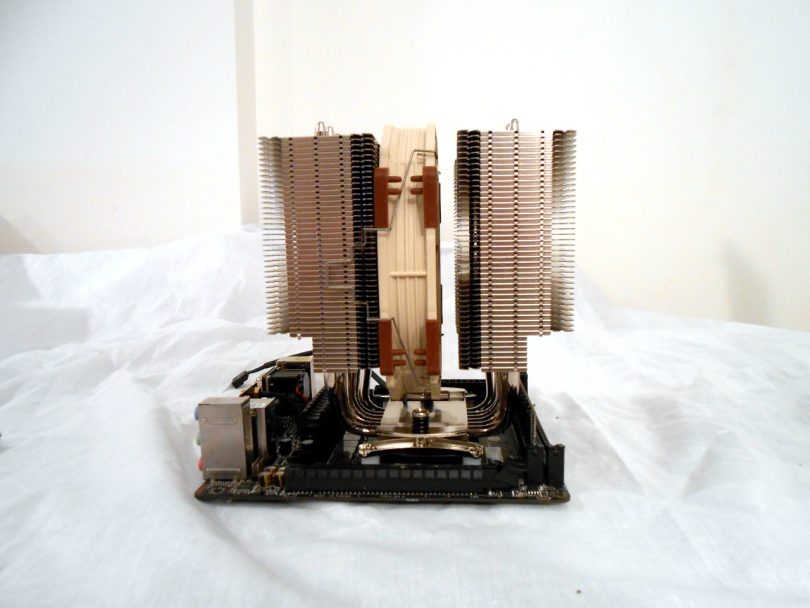 Apart from the aforementioned PCIe slot, no conflicts are to be found on our test board. Mission (mostly) accomplished! 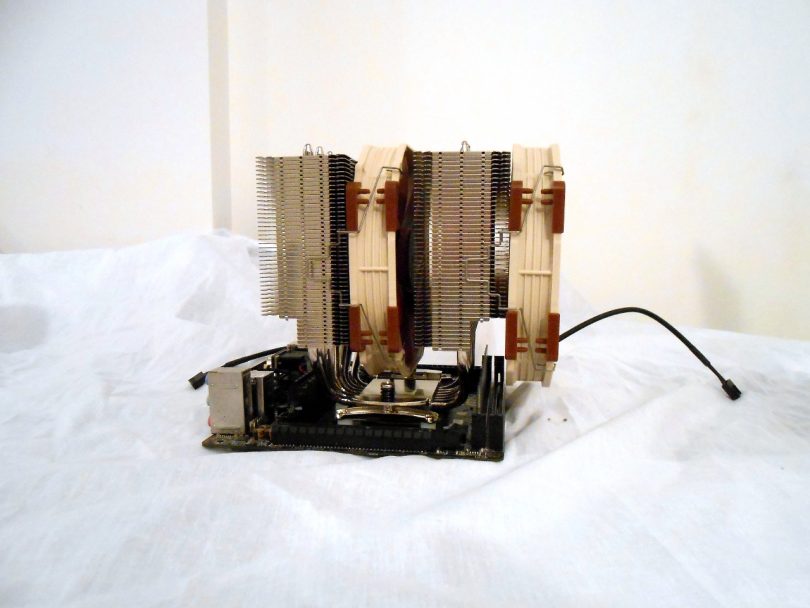 With two fans it’s almost like this cooler was designed for APU systems on mITX. Check out that RAM clearance! 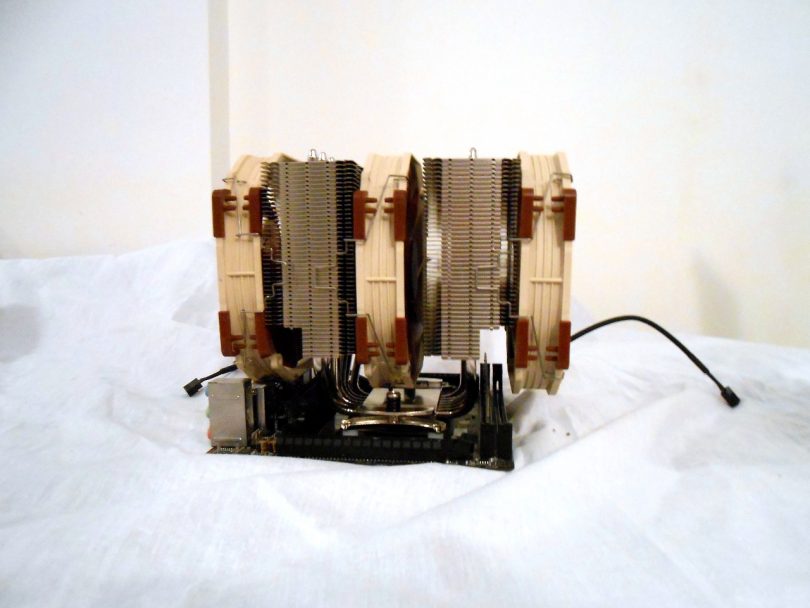 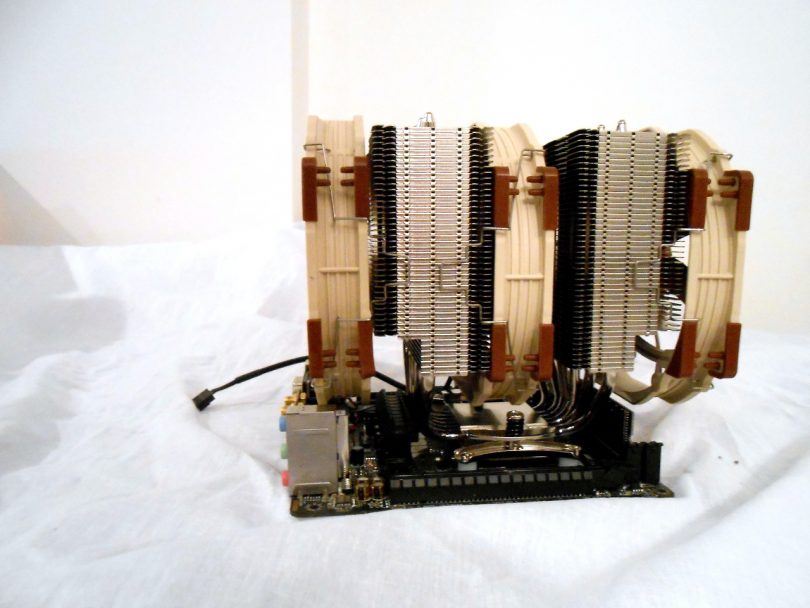 Triple fan, just for fun. The rear fan miraculously doesn’t conflict with the rear IO! While the idea is amusing, this is a viable setup on this board. You know, for the crazy ones. 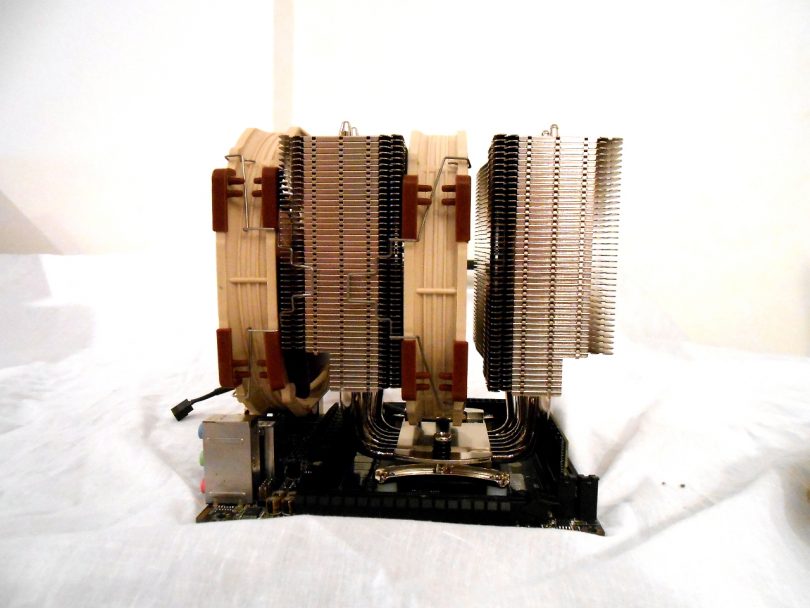 Back to two fans, but running the second one at the rear. In this setup, the cooler sits entirely within the confines of the motherboard. We imagine that this may be the best bet for a lot of the enclosures that allow this cooler to fit vertically.

To test this cooler, we used the SmallFormFactor.net extreme test bench and methodology, as detailed here.

As expected, the cooler performs exactly like the NH-D15.

Let’s deal with the elephant in the room first. Yes this cooler is huge and won’t work with most SFF systems. In a world with coolers that provide a lot of performance in a smaller heatsink or ones with a more practical top-down form factor, the necessity of the NH-D15S in the SFF space becomes much harder to argue. We can’t recommend it for the great majority of readers.

At the same time, those of you who are more ambitious could really make use of this cooler in a well designed scratch build or case mod. At the end of the day, the cooler with the greatest capacity to dissipate heat is going to be the one that cools the best and can cool the quietest. The population of enthusiasts who would want (and can find a way) to use this sort of solution might be tiny, but they do exist. We think that they should weigh the performance figures of this unit against others and decide for themselves how much value there is when comparing a large cooler with something as massive as this impractical behemoth.

Succinctly put, the performance of this cooler is amazing. The NH-D15S matches its older brother and sits very high in the air cooling ranks. I’ve used the NH-D15 on my FX-8350 for some time in the past and I am pleased that the NH-D15S keeps the same performance. Although the size disqualifies it from the consideration of most, you might be one of the ideal users who demand the utmost in terms of performance and noise.  If that sounds like you, I’d suggest that you consider what a system with the NH-D15S might look like.

This cooler is currently available for around US$85 on Amazon.com