I was checking SilverStone’s Facebook page to see if there was any updates on the 700W SFX-L unit and spotted this interesting photo of their PSU lineup. The above picture is a cropped and sharpened view of the linked image.

As far as I know, the two mystery SFX PSUs in the front are previously unannounced units. At Computex last year they had shown off a non-modular SFX unit that still hasn’t been released but these two new units are fully modular. More interesting though is the fan, which based on my measurements of the casing, is a 92mm fan. The SilverStone SX600-G has a slim 80mm fan and has built a reputation among noise-sensitive SFF enthusiasts as being bit too loud so some have been looking forward to the upcoming Corsair SF600 due to the 92mm fan that unit has. SilverStone has been at the fore of pushing SFF power supplies though so it’s nice to see them firing back with a similar unit of their own. It’s even possible that both units are manufactured by the same OEM, though I haven’t heard any solid info on the OEM for the Corsair.

It’s very difficult to make out the text but it looks like the unit in front says 500W and the one behind it 650W. The unit in front could possibly be 600W, which would make sense considering they both appear to have 2 x 8-pin PCIe connectors. If they come with the same 2 x 6+2 pin cables that the SX500-LG and SX600-G come with, that would mean up to 4 x 8-pin connectors total, which seems a bit much for just 500W. On the other hand, having two units with a rated wattage only 50W apart seems silly, so I guess we’ll have to wait for official information on these. 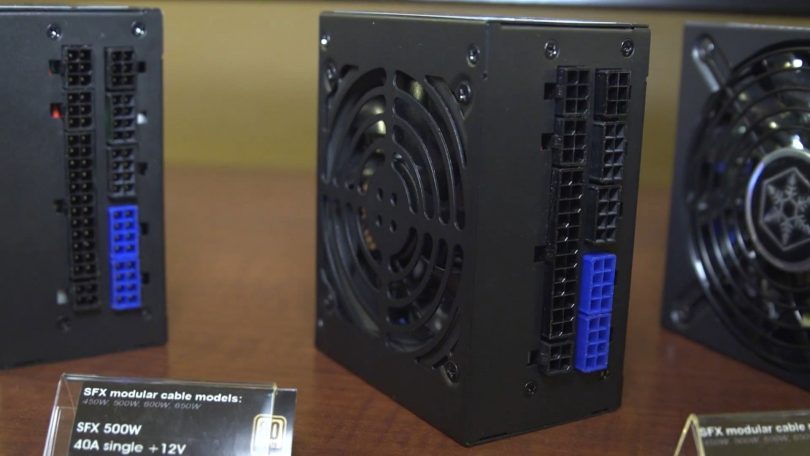 Linus from LinusTechTips visited the SilverStone suite and the mystery PSUs made a brief appearance. Unfortunately, even though Linus is typically a SFF fan, he quickly glossed over the new units but it does confirm that the wattages are 500W and 650W. Fortunately SilverStone has kept the same model number scheme as the previous two units and I was able to track down an article confirming that these are the new SilverStone SX500-G and SX650-G.

Edit 2: According to Tom’s Hardware these two new units are being manufactured by . This is very interesting because the similar Corsair units are being made by Great Wall. However, this means that it’s unlikely these units will have the more sophisticated fan controller of the upcoming SilverStone SX700-LPT, their 700W SFX-L unit, because the OEM for that is Sirfa/High Power.

Edit 3: The Tom’s Hardware article has been updated and I’ve since verified with SilverStone that the OEM for the SX500-G and SX650-G is High Power/Sirfa.