For those who like the size and form factor of the current Apple Mac Pro but want something more suited to high-end gaming, MSI now has you covered with Vortex. Within the 6.5L cylindrical chassis, the Vortex supports up to an Intel i7-6700K, 64GB RAM, dual PCIe 3.0 x4 M.2 slots, and two GTX 980s! 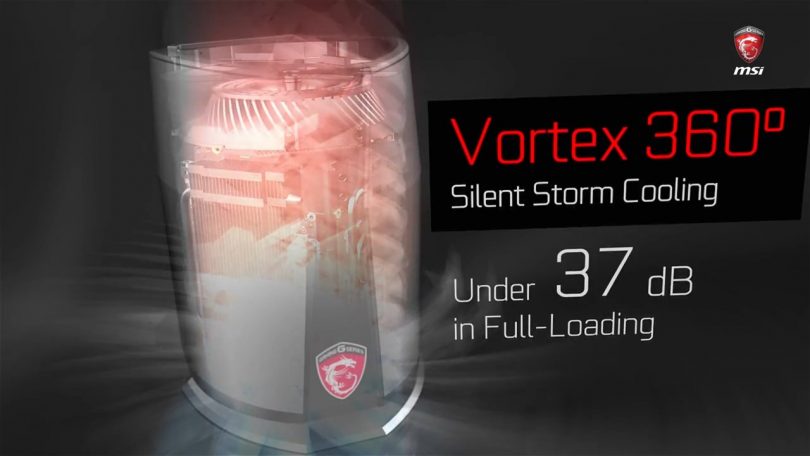 This is made possible by using the MXM version of the desktop GTX 980 that Nvidia released a few months ago. The parts are arranged in a triangular layout. Each card and the CPU has its own heatsink assembly and a single centrifugal fan at the top of the case pulls air in through intakes at the bottom, up and through the heatsinks, and exhausts out the top. Overall the cooling arrangement is very similar to the Mac Pro.[mks_separator style=”blank” height=”2″] 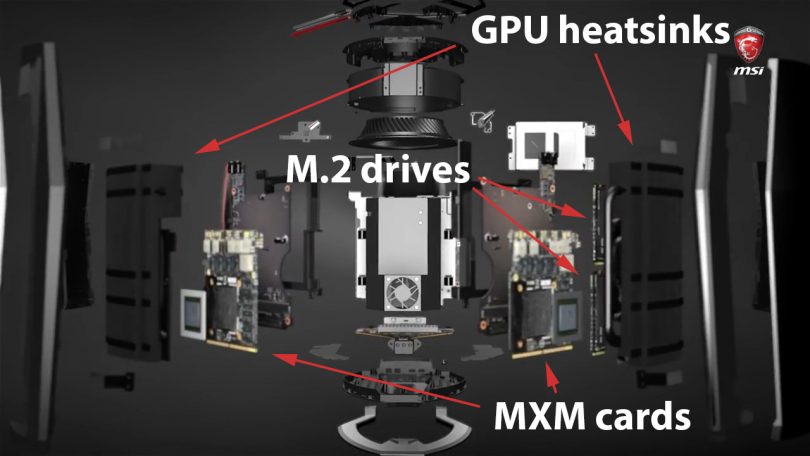 The intro video conveniently features animated exploded views of the case to give us some insight into the design. So here you can see the two MXM GPU cards and their heatsink assemblies. Unlike the Mac Pro, the MSI Vortex isn’t built around a central triangular heatsink “core” where the components are mounted to each face of the triangle. Instead we can see how each heatsink is kept separate for better thermal isolation. Also visible are the dual M.2 drives, which look to be mounted to one of the MXM slot PCBs.[mks_separator style=”blank” height=”2″] 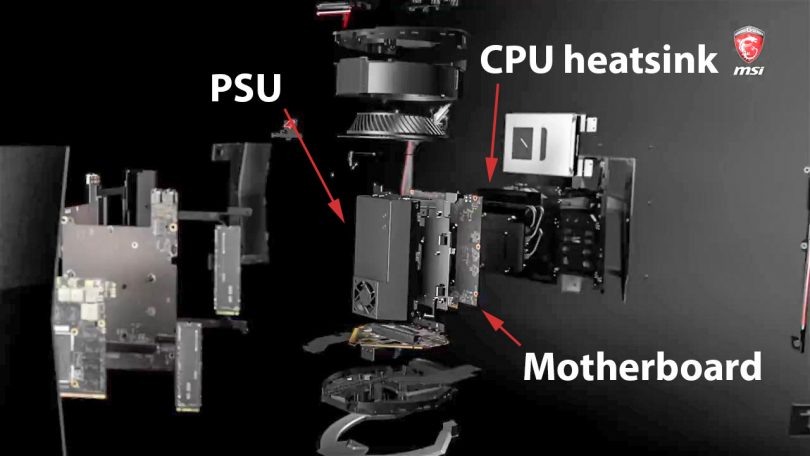 Rotating the view a bit, we can a good overview of how the internals are arranged. To the left are the GPUs and M.2 drives we were looking at straight on before. Visible in the center of the image is a block that I’m almost 100% certain is the PSU given it’s mostly sealed nature and dedicated cooling fan. On the other side of the PSU is the custom motherboard and the heatsink for the CPU.[mks_separator style=”blank” height=”2″] 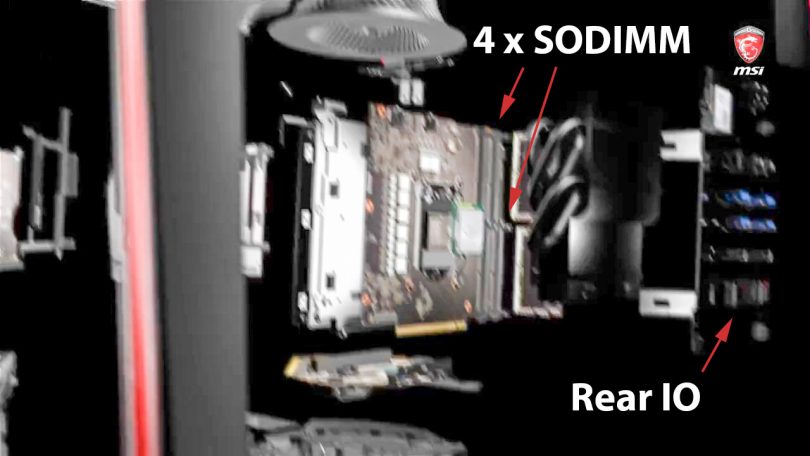 Bit blurry this time but continuing to rotate around, we can see the motherboard. Obviously not just an off the shelf ITX board. MSI says they will support end user upgrades of the Vortex but unless they make available next-gen board, platform upgrades won’t be happening. One thing I really like though is the use of SODIMM in order to get 4 slots for a max of 64GB of RAM. It’s something I really wish the motherboard makers would start to implement on their Mini-ITX offerings.

Interestingly, the CPU heatsink is sandwiched between the motherboard and the PCB for the rear IO. It’s hard to see but there appears to be 4 x USB 3.0 ports and 2 x USB 2.0 ports. I can’t make out the other connectors.[mks_separator style=”blank” height=”2″]

Overall, it’s a very ambitious and interesting design from MSI. It does borrow several design cues from the Apple Mac Pro but perhaps it’s inevitable when trying to cram as much power as possible into a compact, cylindrical casing (Trash Can Form Factor anyone?). MSI says the Vortex will be easy to upgrade by the end user but MXM GPUs have traditionally been very expensive and so even though it was technically possible, it usually hasn’t been economical to upgrade laptops that have replaceable discrete cards. I’ll be interested to see if MSI expects people to upgrade GPUs, or just RAM, SSDs, and maybe CPU.

No word on pricing of course, but MSI says it “will be available in 2016”.