I had a SilverStone ST45SF but sold that a few years ago.

The 450w SilverStone could either be on the FSP for Highpower design, depending on the version. I'm not sure on the OEM for the Sharkoon.
Out of these 3, which would you choose? 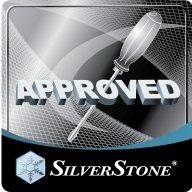 We kept ST45SF V2 in the lineup mainly for SFF users that need to power more drives (e.g. in our DS380, CS01-HS, CS280) with V2's higher capacity +3.3V and +5V. Since you are using a SG05, that means you won't be powering that many drives so the ST45SF V3 would be the better choice for you. If you ever thought about upgrading your card to a GTX 1080 class, then SX550 is a good choice too.
Reactions: VegetableStu
N

I'm leaning on getting the 450w v3 non modular for the 92mm fan. Although the lower temp rating is :thumbdown:

(Since a SilverStone rep is here, I'll clarify more on why I still want a non modular SFX even though I'm already using the ST45SF-G v2 and have previously owned the ST45SF v1 non modular)
The new PSU will be used in my SG05 w/ handle rig so I want to be able to use the support bracket as I will be carrying around frequently.

Meanwhile the ST45SF-G will be used in a build with a gpu that doesn't require pci-e power for better cable management.
Ideally, I would like a lower wattage modular passive PSU.

ALSO, get rid of the long molex and floppy connector! If you must include it for compatibility, have a short cable with 1 molex at the end, then include the the legacy connectors as adapters.
(what I mean is, cut the cable after the first molex connector, and add a plug to join the rest of the cable)
N

I was looking through SilverStone's site checking the difference between v1 and v3 and I saw the GPU support list.
http://www.silverstonetek.com/downloads/PSU/GPU-supportlist.pdf

It states the 300w ST30SF supports the 1070. Is this correct or just copy&paste gone wrong? (even thou some of the fan and rails information is incorrect)
my oced 1070 uses around 160w at the wall.