With the current trend towards 'ITX-ing' graphics cards, I thought I would have a look at a current generation card - the Gigabyte GV-R736OC-2GD. This card features the AMD R7-360 GPU, with 2GB of GDDR5 and a dual-slot, full height, form factor.

great review, look forward to the benches. Agree on the copper slug though, probably not needed but would have been nice to see all the same
Reactions: confusis

I'm curious how the heatsink will hold up under stress, visually it looks a little underspecced for 110W.

Phuncz said:
I'm curious how the heatsink will hold up under stress, visually it looks a little underspecced for 110W.
Click to expand...

As a preview:
During this test the GPU hit a max of 70c. 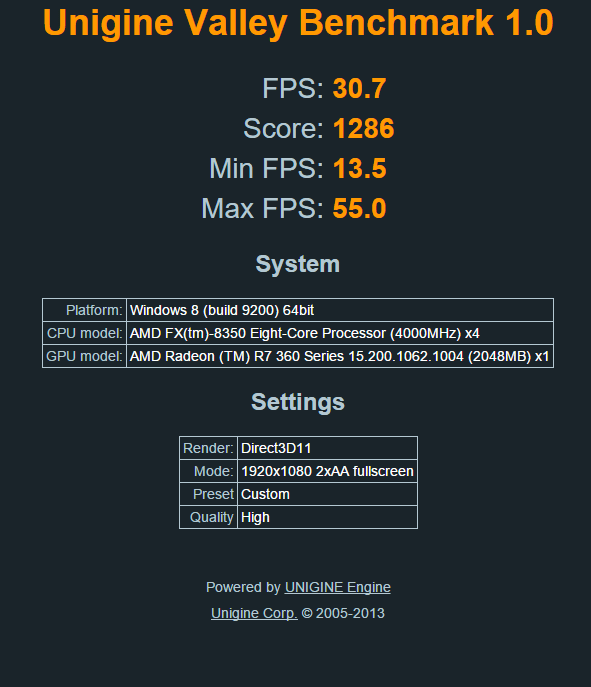 Noticeable. Not as loud as the AMD stock cooler but you can definitely hear it spool up to 100% under such load.

Part of the second part of the article will be a recording of the sound of the card under idle and load, as while a fan can be quiet, it could have an annoying tone, or a fan could be moderately loud but a subtle tone. Hearing is also very subjective.

About the topic of noise, it's hard to put it in perspective. With vision you can compare to another object (dimensions), for touch you can compare to other surfaces (texture/material) or heat sources (temperature), but I haven't found a good, uniform comparison for sound (volume).

My PC is silent in my regard, but I'd bet money I'd find a person on [H] that could hear my exact same PC config from across their room. Because people have different ambient noise, gray noise and whatnot. I also tried to record a noise from my PSU and it added alot of gain to the point it wasn't representative anymore. Also because there is no baseline for sound volume recording, let alone playback.

I've run into that issue as well with presenting a standard baseline for sound. I've wondered if the speaker volume of something like a specific model cellphone is consistent enough from unit to unit to have an app that plays a sound at a specific volume level to serve as a reference.

I could see it working with iPhone but Android will be tricky since there's so many models.

Even that doesn't work too well. Your auditory system adapts to ambient sound levels even faster than your vision system adapts to ambient light. Even if you can reproduce the sound at precisely the right volume, you'd need either record it and play it back in a acoustically isolating environment, or do so in an environment with exactly the same ambient noise. What sounds infuriatingly loud on a quiet still night will be inaudible during a windy day with planes flying overhead and traffic outside.

Good points guys. The idea for the audio recording was more about tone than volume - as each person is also sensitive to different tones of noise. I find a 200mm fan to be non intrusive, but a 40mm fan at the same db level would be infuriating!

You still run into the adaptation issue even in terms of tone.
Your ear detects sounds using hair cells in your inner-ear. These hair cells are a composed of a bundle of long haira (hence the name) and the base of the cell that detects deflection of the hairs. The hairs come in different lengths along the length of the cochlea, generally being longer at the outside/outer end and shorter and the inside/far end. The cochlea is a spiral tube filled with fluid, and this fluid is coupled to your eardrum; the fluid couples the hairs with vibrations from the eardrum. Sounds are detected by a combination of bulk fluid movement (for low frequency sounds) that shifts around a bunch of hair cells the same way, and individual hair cells of a certain length being particularly sensitive to certain frequency bands (think of it like resonance).
Why is all that important? The adaptation of your ear to different sound volumes is frequency dependant. For example: if you were to sit in a quiet room with a loud 10kHz tone playing, hoir cells sensitive to 10kHz would adapt and reduce their responsiveness (in terms of the neurons those hair cells are stimulating, the output would be inhibited and produce a slower pulse-train). But hair cells that are not sensitive to 10kHz would be mostly unaffected. When you walk out of that room, for a period of minutes, to hours (depending on what threshold you use, as the drop-off in effect is gradual and affected by the environment) your hearing will be less sensitive to sounds in the 10kHz region, but normally sensitive to other frequencies. Listening to music certainly sounds very odd!
This is important because ambient noise has a variable spectrum dependant on contributions from multiple varying sources, so the ambient noise in one location will cause a different adaptation than the noise in another. As a simplified example: if you live near an airport, then during the day you're likely to not as sensitive to high frequencies than someone far from any flightpaths. A fan that 'whines' annoying for one person may be completely acceptable for another based purely on where they are. Then there's the room itself: the shape, dimensions and contents (e.g. lots of rough soft furnishings vs. hard flat walls) can dramatically affect the sound hear or measured, and even change it depending on where in the room you are.


Yeah, reliable and repeatable audio testing is hard. Brains Are Weird and your ears are fallible. That's what all the expensive sound damped vibration isolated rooms are for when testing components, and why audio engineers rely on specially outfitted listening rooms and consulting audio meters rather than just 'going by ear'.
Reactions: confusis and Phuncz

Awesome explanation, if we had achievement badges, you'd gotten one !

calibrated mic & graph it at a known distance? although perhaps the other components in the chassis would affect the measurment

That's a start for recording, but the largest problem is still on the playback side where there are many variables.

I believe silentpcreview uses a simple metric for playback. They have a sound file where you turn your volume to a level where you can just hear the ambient noise. then they add in the sound for sampling.
Reactions: iFreilicht

Hmm that might be a good baseline. With high ambient noise in your own environment, this helps to compensate. Might be a good and simple way to tackle this.
Reactions: confusis

Article updated with a few basic benchmark results. Time was against me on this one - so I haven't been able to do the audio analysis of the cooler.
Reactions: Phuncz

SFF.Network Resizable BAR at PCIe 3.0 With a Mid-Range GPU Benchmark