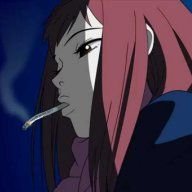 Who needs more than 11L of space, puh.

So I built myself a watercooled Node 202 to upgrade from my laptop. I looked at a lot of peepz on the internet on how to do it, and kept the best ideas from all of them. First I made the hole between the two compartiments for the cables just big enough to fit the pump of the aio through. Then I made a square gap in the plastic of the case, behind the fan and the radiator. This way it pushes out air more easily. Since the metal that's over that plastic normally does not have a gap on that spot, i decided to go to a steelshop, and buy myself a perforated slab of 1mm thick stainless steel. It looks pretty awesome, but I still have to find a way to secure it. Another thing is that the gpu heatsink is 1mm too big for the fan to be fixed onto the radiator with screws. It sits there perfectly fine though for now, secured by the 8pin powercable of the gpu. A possible solution I'm thinking about is two rubber bands under the rad and over the fan to force it onto the rad, so that it can't move away from the rad. I have a feeling it does that slightly.