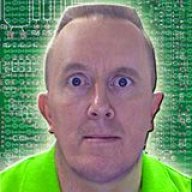 I purchased a Gigabyte GA-H110MSTX-HD3 to build my Apple ][ Floppy case mod, but the i7-7700 would not boot due to firmware needing to be updated. I purchased the cheapest CPU I could find on the low end to update the firmware (G3900). So having an extra CPU, I bought another mobo and then needed a case. I wanted a case smaller than my Apple ][ Floppy drive Hackintosh, so I checked the size of a Mac Mini and it fits!

Of course this build will be less powerfull with the G3900, but knowing I can throw in up to an i7-7700 will be ok for now.
This will use onboard 510 Intel Graphics. Using a Dynatron K2 cooler with side exhaust out the rear, so similar in design to the original Mac Mini. The first mac mini was PPC-G4 and the case design from 2006 carried through to 2009. Since the RAM and CPU cooler end up being too tall, this one will NOT have an internal CD/DVD slot load. I bought an A1283 (2009) empty case off ebay for this build (photo is of the bottom).

So I had to design a replacement rear plate to fit the Gigabyte motherboard and the apple case.

I only had red in stock, so it works well to show the process. White comes later. Then I had to add a piece to complete the CPU cooler exhaust to the rear of the case...

Everything looks good, so picked up some white and printed the rear panel:

The width of the motherboard lines up with the two front mounts, so I will use those to anchor the motherboard in the front. After I glue on the rear panel to the base, that should hold the motherboard rear down. The rear holes do not line up, as the spacing is too long.

The length of the motherboard comes out nice, and I will have to clean up the trimming of the base before I glue on the rear panel.

More to come when completed, like benchmark and final photos assembled.
Reactions: JaF151, raymondo, Choidebu and 1 other person