Storage Is the WD Black SN850 too hot the 3.0 liters Streacom F1C case?

Usage scenario: Basically nothing challenging. 95% of the time will be office stuff, surfing and youtube. Sometimes I'm using 1-2 VM and sometimes I'm playing old games. So basically my system will be in idle mode for most of the time. I know, for workloads this easy my build is maybe a bit overkill, but my current setup is from 2011 and I also plan to use the new system for this long. Thats why the extra power. Ah, and another reason: When it comes to computers, I've got a massive fetish for everything being extremely fast and snappy

The motherboard has 2 NVMe M.2 slots: One the back, which does not allow the SSD to be cooled, and one on the top-side, where it will be cooled by the integrated motherboard cooler.
I plan to install the slower WD Blue drive on the back side since it does not tend to get that warm and thus, does not need to be cooled. This drive will only be used once a day to backup the system SSD (don't worry, I also do backups to an external drive).

Now my problem/question is: From what I've read about the F1C case, without further modifications (like drilling holes in its top cover), this case has a bad ventilation, even with an additional case fan. I've also read lots of reviews on the SN850 drive, which is also said to run rather hot, compared to other drives. In idle its temps are 5°C higher than the Samsung 980 Pro, in heavy use 10-13°C.
BUT since an SSD only needs a couple of watts (~6-8 from what I believe) I wonder if this little additional heat has any real impact on overall system temps?

The reason why I'd rather go for the SN850 drive than the Samsung 980 Pro is that the SN850 has a way bigger cache when being 50-80% filled. But if you guys think that the heat makes a substantial difference, I'd take a Samsung drive.

PS: If the case is going to run too hot (which is probably what will happen), I'm ready to drill some holes
T

Fixed the tag for ya. Edit button is disabled for new users.

But keep posting & you'll see it after a while 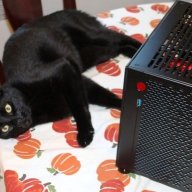 I've never had any problems with the back mounted m2 drives, even in sandwich cases where it's exposed to extra heat from the GPU backplate. You can always install a slim heatsink if you are concerned with temps - ttps://www.amazon.com/gp/product/B078X8WCY2
T

hereforthefeast said:
I've never had any problems with the back mounted m2 drives, even in sandwich cases where it's exposed to extra heat from the GPU backplate. You can always install a slim heatsink if you are concerned with temps - ttps://www.amazon.com/gp/product/B078X8WCY2
Click to expand...

I'm not really concerned of the SSDs temperatures themselves but rather of the impact of hot SSDs on the system's temperature (CPU, VRMs, etc).

K
Discussion Has anyone owned a Meshy and a Q58?