I've had the building bug for a while and love SFF / ITX builds. After a while I started thinking 'how small can a fully featured build get?' and, of course, I ended up building something. My criteria were for it to be easily portable, fully self-contained (no power bricks), capable of HD multimedia and gaming, and to contain an optical disc drive.

I settled on the Inwin BQ656 case, the overshadowed little brother of the Inwin Chopin which has received a lot of attention on Youtube. This case is unique as it allows for a slim optical drive and 2.5" storage drive behind the motherboard, as opposed to just two 2.5" drives in the Chopin. It may not have brushed aluminum wrapped over it, but this is a very functional and compact case, coming in at 3.3L with integral 120W PSU.

Thats about it. The stock AMD 'Wraith Stealth' cooler took some modification to go into this tiny case, which was done by removing the trim ring and standoffs from the core fan unit followed by carving down the fan shroud and filing the case cutout edge. The case side mesh was taken off for filing the edge down and the replaced. This allowed the stock cooler to fit in just fine.

I have yet to give the system any demanding loads but it boots up just fine with Windows 10 and runs all basic tasks I've thrown at it easily. I'm keen to start overclocking the GPU portion of 2400G to see what I can get out of it, and I'll try and push the RAM to 3200MHz to help with graphics performance as well. 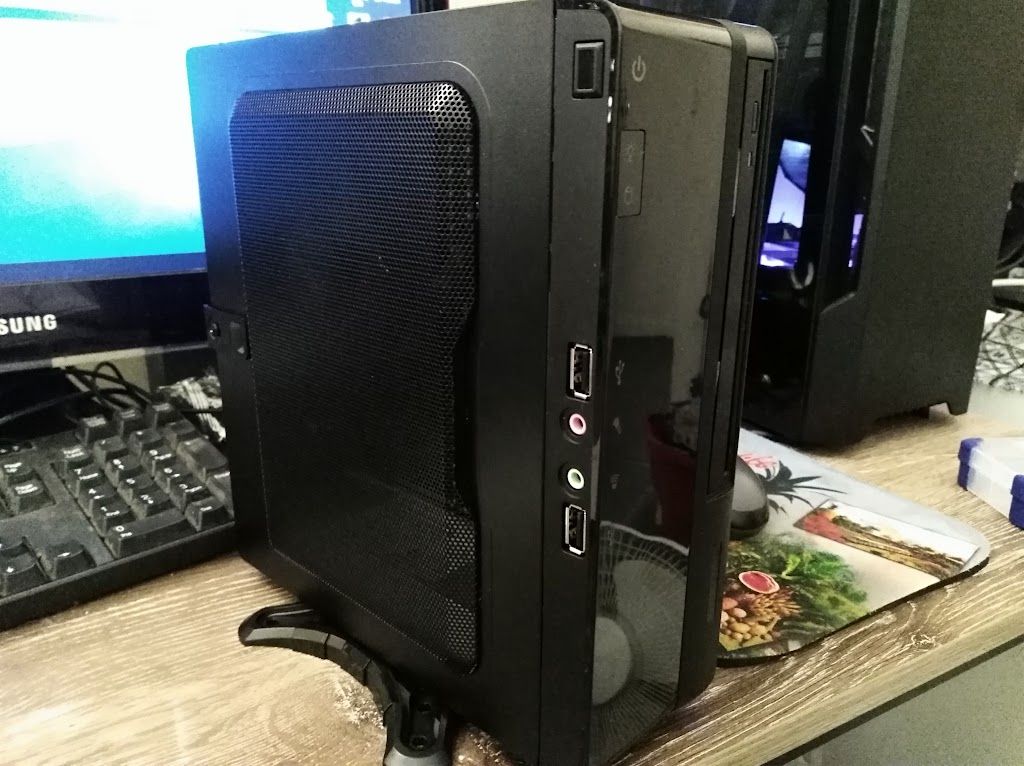 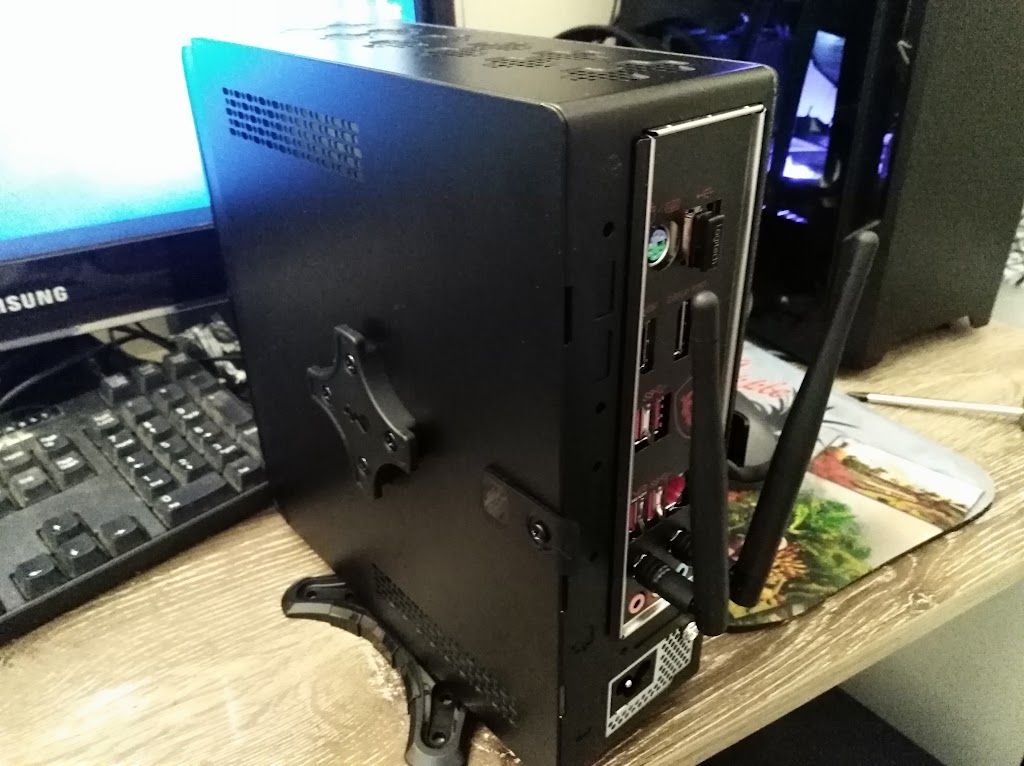 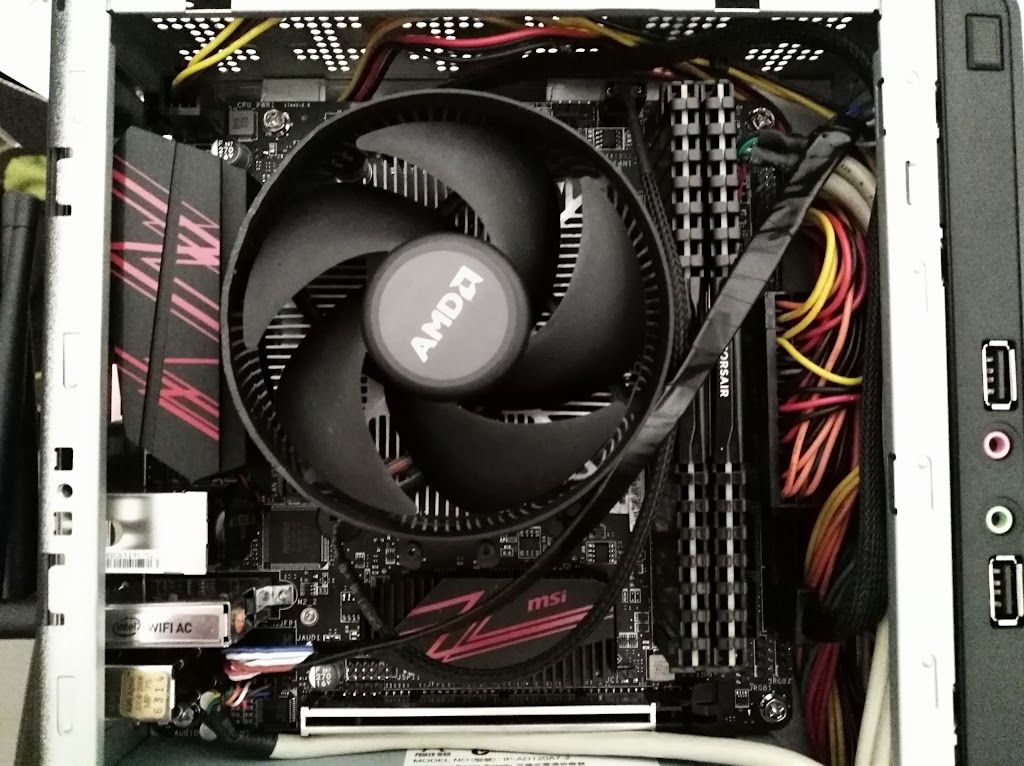 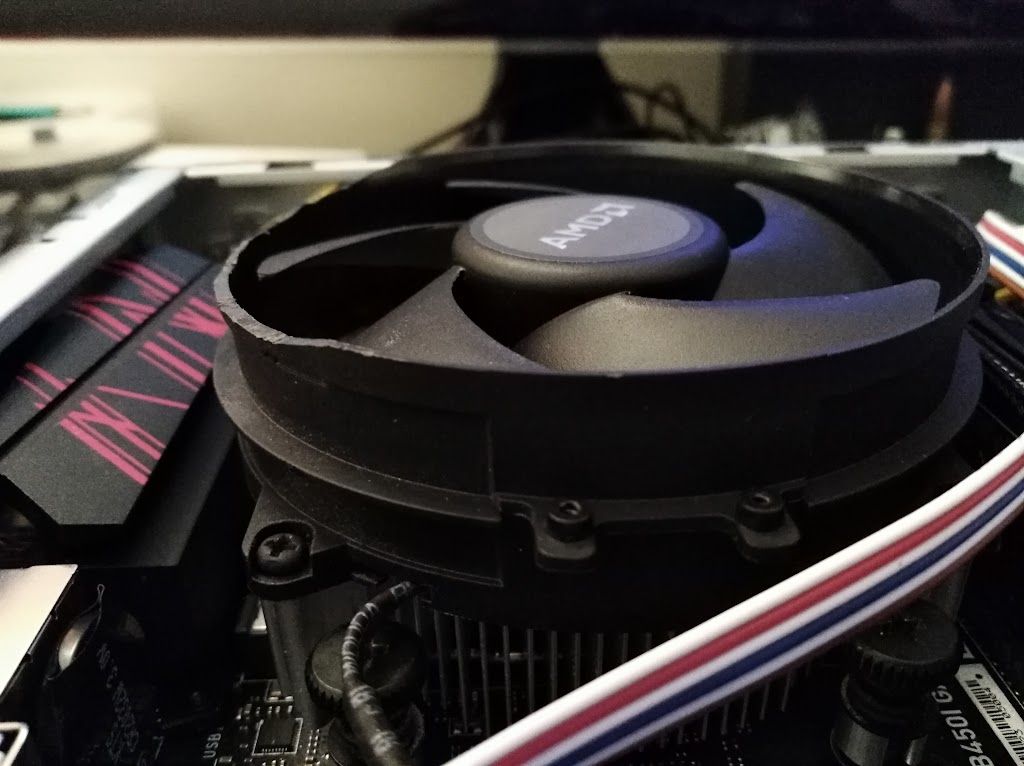 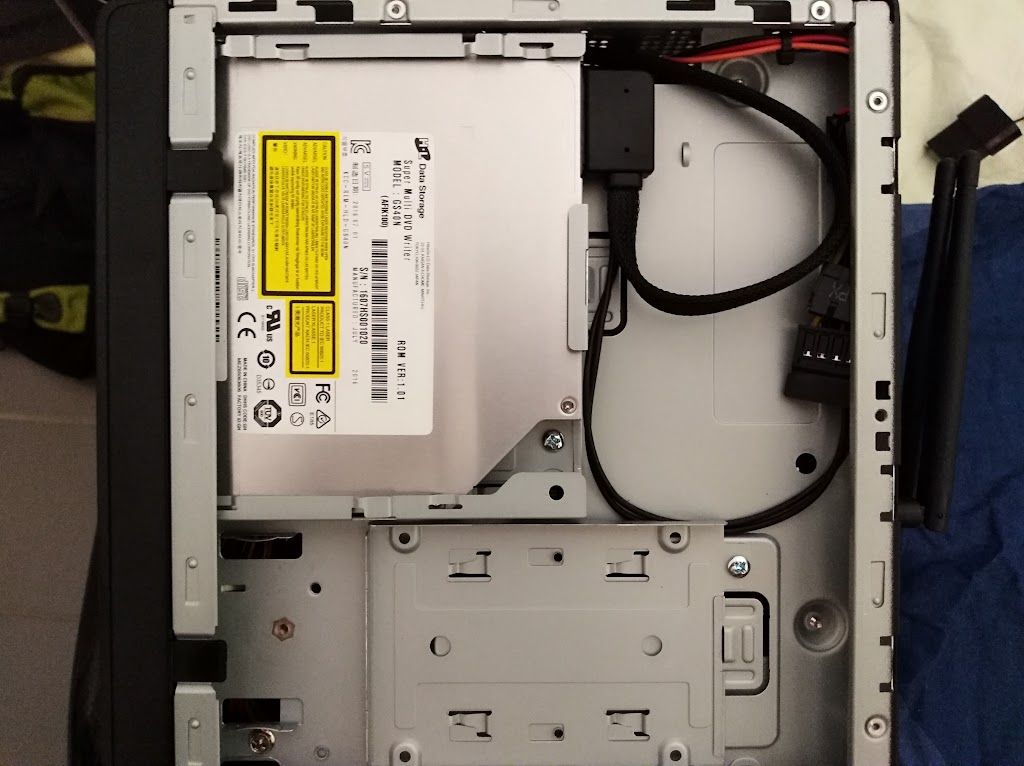 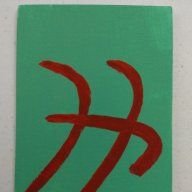 How's the noise from the PSU? From all the research I've done on the Chopin/BQ656, the PSU seems to be a sore spot for some owners. Also, was the M.2 slot on the back of the motherboard?

Hi mate, the PSU noise is definitely the louder of system noises. Given the size of the case and its intended use I deal with it, but I am looking at splicing a resistor into the fan cable to see how it helps thing, or possibly opening up the vent mesh panel as it looks pretty restrictive. The PSU doesnt seem to run hot, either, so it may be the fan is just overkill.

The M.2 slot was indeed on the back of the board, and with this board there didnt seem to be any issues. I've since added a Kingston UV400 240GB SSD for my Steam games library and it runs fine.

The plan at this stage is to undervolt the CPU as it comes nowhere near full utilisation and possibly even drop the clocks 100MHz to 3.5GHZ. This should free up power from the PSU and cooling headroom in the stock heatsink to go to town on the GPU.

Performance so far has been promising, with 82fps average in PUBG @ 720P Very Low, and 60fps @ 900P VLow with Low textures, with a minimum of 48fps. This second setting seems a good fit and I'm now going to try to tweak for visual quality and see what I can get before running out of RAM.

I did end up dropping the CPU clock to 3.5GHZ - not a big drop but allows more watts and cooling to be sent to the rest of the system.

Performance is improved in games and system stability so far seems good. Temps are low 70's Celcius when gaming and idle temps seem to be about 5 to 10'C above ambient.

Worst part of the system is its crazy PSU fan - I'm going to replace it with an A4X10 FLX Noctua unit which apparently are whisper quiet and still cool very well.

Update - I changed the PSU fan out to the Noctua A4X10 FLX. Works perfectly, much quieter and still keeps the PSU cool. The time they must spend designing these things justifies the pricetag. Highly recommended mod to anyone with an Inwin ITX PSU.

The rest of the build has remained more or less as I built it, with the CPU being crept up to 3550MHz as temps haven't proved an issue. I did drop the GPU portion to 1550MHz but am going to creep this up slowly over the next few sessions with the build so I can find a balance between clock speeds and pwoer usage - I don't want to exceed 1.2v as this will lead a) to an unhappy PSU and b) to a chip that dies sooner rather than later.

Sweet build! Care to share some pictures of the side panel mod? I'm curious as to where and how much you had to file it down to fit the cooler.

The PSU fan swap seems like a no-brainer, at least if the PSU still seems to run cool. If you want to be very safe, you could (temporarily) stick a thermocouple to some of the hottest components inside of the PSU and check their temperature under full load. Most small-fan PSUs seem to overdo their fan curves (and seem to favor 7-8000 (or higher!) rpm fans), so I don't doubt that the swap is safe, but PSU case temps don't necessarily match component temps very well. Btw, what kind of power draw are you seeing with your clocks?

Beyond that, I'm always impressed at just how well the Wraith Stealth actually works, especially given its small size and incredibly basic design. I guess there's a reason they skipped the copper slug seen in the Spire for the Stealth - doesn't seem to be needed. AMD (and Cooler Master who IIRC is the OEM for these coolers) made an excellent choice of a high-pressure fan blade design and adding a proper duct around the fan - makes me wonder how much better the Intel stock cooler would be with better fan blades and a duct around the fan.
Reactions: boingk

Valantar said:
Sweet build! Care to share some pictures of the side panel mod? I'm curious as to where and how much you had to file it down to fit the cooler.

...what kind of power draw are you seeing with your clocks?

Beyond that, I'm always impressed at just how well the Wraith Stealth actually works, especially given its small size and incredibly basic design.
Click to expand...

Thanks mate! Pictures below. The top of the image has the filed section (compare to the bottom of the image). Its a very basic modification and may not be needed with other motherboards. The MSI B450I situates the cooler to the upper left of the board and thus needs a small amount of clearance. Many other boards seem to have it a bit more central.

The other two pics just show the state of internal components and the outside with scale to my hand for those not familiar with the case.

No idea on draw at the moment, I don't have a wattmeter to measure wall-draw and am yet to boot a hardware monitor. From comparable builds I would estimate between 100 and 110W under a 'gaming' type load - ie visually intensive with moderate (40 to 60%) CPU usage. I'll be able to find out next session.

The AMD coolers are indeed CoolerMaster. Their top-tier coolers, starting from back in the FX-8xxx series days, are amazing for a stock cooler and are both effective and quiet. Hell, the Prism comes with multi-layer RGB!

I've done what I can to keep this build cool, but am thinking of modding the case to add a fan. Not sure on size or location, but near the RAM may help as the second stick doesn't receive much airflow. 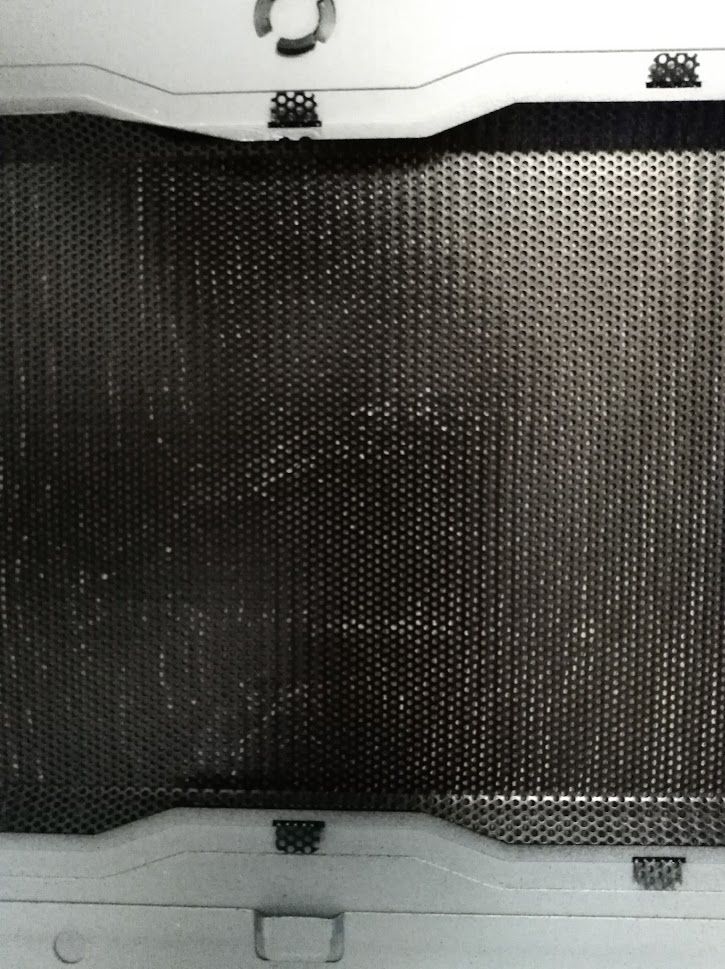 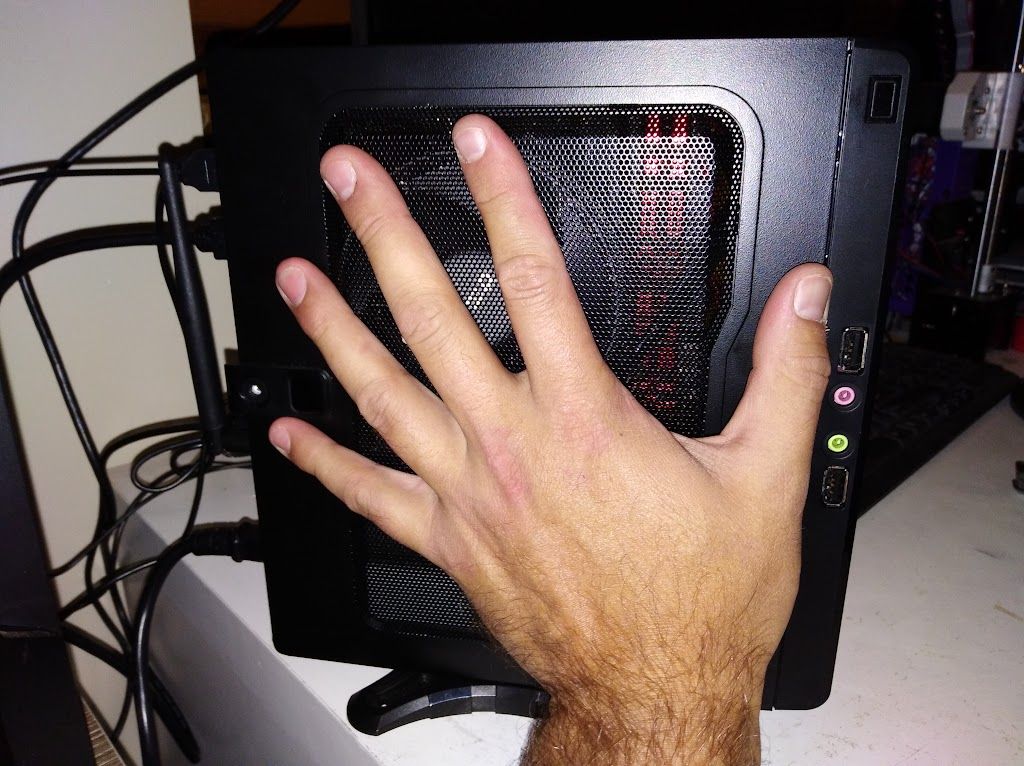 Thanks for the pictures, that is indeed a very small modification. Even the cuts to the fan duct look relatively easy. I'm impressed that you're running a 2400G at those clocks at that kind of power - I've seen too many people talk about 150+W for overclocked 2400Gs, though that might be under (unrealistic) power virus loads. Makes me look more positively at the prospects for my planned APU build (I'm planning to mod an old GPU cooler to use with it, and ideally run it semi-passively with the fan only ramping up when needed, but still push the clocks to maximize gaming performance). I wonder what the next generation of APUs will bring!

I think that's the secret, if you're looking at maximising performance in gaming you can underclock the CPU in order to get the best GPU overclock. People try to clock both when realistically you have all the CPU power you need when coupled to the IGPU.

I run all my builds through userbenchmark dot com so I can compare relative performance, and got an 88th percentile build rating - the GPU score was 99th percentile so I was quite happy with that.

The next generation of APU is what I'm waiting for, I'll happily build up and sell a system to upgrade the 2400g to it.

Builds May 8, 2021
Sicaris
S
U
Ryzen APU in an InWin Chopin questions