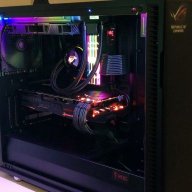 i am new to this forum and I would like to introduce you to my new project.

At first I wanted to build in the Dan Case a4, but then I got to know about the Ncase M1.

Due to the fact, that it is nearly impossible to get it in Germany, not even used, I just got the lucky one to buy one of the few cases in Germany.

The build should consist of:

In the Following I will post the Pictures! At first some pictures of the case when I bought it, then the process to the status quo. I am not finished with the project, but I hope you guys will follow me building it.

The guy I got it from cute the case in a bad way, that's why I have to put some work in to it!

When I got it

Then I started making it beautiful again

And then already starting with the new build.
Last edited: Nov 8, 2019

So this is the status quo after 2 days of work!

I will try to finish the front I/o tomorrow, and yes, I cleaned out the lower part which included powerbutton etc, because that was the part of the Ncase I didn't like. I would love if you guys check it out, because there is moooore to come!

Dammmn, you have some big guts and nerves to destroy (up till now) such a perfect and expensive piece of aluminium. Would love to see how great it turned out when you are finished!

HyperActive said:
Dammmn, you have some big guts and nerves to destroy (up till now) such a perfect and expensive piece of aluminium. Would love to see how great it turned out when you are finished!
Click to expand...

Thank you bro! The Problem is that I bought it destroyed by the guy who sold it to me.. But it was my only chance to get a M1 here in Germany so I took it and now I am trying to Make the best out of it! But I have some good ideas so lets see

Really a shame when people start hacking up a case like this, good luck to you. Was the GPU already vertically mounted or did you do that?

True story!!! But it was the only one available in WHOLE GERMANY... But tbh I also like the challenge to restore the case.

It was mounted vertically before but in a cringe way. I now fixed it! Today I got very far with the front I/o. Will post pics in a min.
Reactions: rfarmer

Hey guys, so today I had a lot of time to spend on the build.

all is put together and I tried my best at managing the cables on such a small place I have built over 10 Highend Pcs but this was really a challenge!

so check the pics!


So tell me your thoughts!

So my Parts für the Build and my New mouse! Also ordered a Logitech g pro Keyboard today ✌?

Even though i am chatting with myself, here is my custom front Panel for my Ncase m1.

Tell me what you think.