I've been making a lot of headway (and getting shocked, apparently) with the system I'm building in my Logic Supply MC600. I took a dremel to the case so I could fit my "DC-ATX" power supply's port that connects it to my AC-DC power brick, and I'm eager to keep working on it. I've done some looking around for services that could do everything right with CNC equipment and I think I'll keep procrastinating if I don't just get my hands dirty and get it done.

So, I'm going back to an idea I originally had when I started talking to Josh about the S4 Mini, and basically I don't want to ruin such a nice case with a mistake so instead I'm working on this MC600. (Which Logic Supply actually gave me for free, very many thanks to them for that.) I'm going to be making a few cuts in the case to allow for airflow and I'm going to cover them with magnetic mesh filters to help manage dust.

The majority of these cuts are basically going to be rectangles, I'm going to cut out the 'mesh' built into the MC600 on the sides, and I'm going to open up the space under my GPU's fans on the bottom of the case. I think I have those figured out.

I'm also going to cut out a symbol on top of the case, roughly above where the CPU cooler is, enabling it to take more are in than a solid panel would. I asked a local vinyl shop (a friend's dad owns) if they could make me a geometrically true version of a quick sketch of the symbol I made, but I'm probably going to try to make my own stencil too so I have some options. But, basically, the symbol is a spiral like this. My current CPU cooler is a Noctua NH-L9i with its 90mm fan, but I'm considering other coolers (especially @Kmpkt's) and trying to rig a larger fan over it.

So, I have a few questions about this 'spiral' cutout, and about helping my case get airflow better in general. In the end I'm more interested in the "form" rather than the "function," but I'd like to at least give consideration to airflow and performance, since there is an overclock-able CPU and GPU in the system. 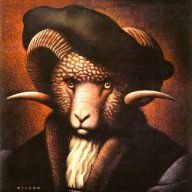 "Has anyone found a "case fan-to-GPU fan" adapter, or is there decent software that can manage specific fans based on GPU temperatures?"

I have the same question

zovc said:
but is there a certain height that would be optimal?
Click to expand...

Pi X radius squared of fan = area of fan.
Add the lengths of the bottom sides (all 4).
Divide the fan area by the total length of the sides.
= optimal height

Use the same units.

But, basically, the symbol is a spiral like this. My current CPU cooler is a Noctua NH-L9i with its 90mm fan, but I'm considering other coolers (especially @Kmpkt's) and trying to rig a larger fan over it.
Click to expand...

I'd say to make some bridges on this cutout, or else you end up with a dangling piece of metal going into your cpu cooler. such long and continuous cut can make any material very malleable
Last edited: Dec 9, 2017
Reactions: Soul_Est

Cleanest and Easiest Way to Make Ventilation Holes in MC600

Looking for input in cooling and airflow in an Evolv Shift case with dual AIOs.