The first CPU coolers to go across The China Desk are the ID-Cooling IS-40 and IS-40 v3. These coolers are from ID-Cooling, a lesser known brand in the western world. ID-Cooling was created 4 years ago, being launched during Computex 2013. How far has ID-Cooling come in this short time? Let's find out.

I think this cooler is sold under another name in Europe
Reactions: Soul_Est and confusis

Interesting to see this perform better with the v3, although that fan could still use a PWM range fix so it doesn't go full-banshee when it doesn't seem to matter all that much, except for the added noise. With great heatsink comes great airflow requirement. So with a small heatsink they could have dialed it down a few notches. It's something I've noticed with the Noctua NH-L9: it never becomes obscenely loud, probably because at higher RPMs the additional airflow doesn't amount to an equal amount of cooling.
S

I used a Silvretta with a G3258 ( 65w TDP) and mostly fine except under sustained heavy load, bearing in mind that there was no added air movement from case fans etc. not a restrictive case, and with ample room around the CPU and cooler.
It was noted on an earlier thread about the Silvretta that the finish to the base was fairly rough and unfinished and this may have contributed to a poor thermal bond and lowered performance. The cooler itself is rated to 95W Intel and AMD, but manufacturers figures are usually over optimistic for real world applications, so probably less than that, but if finished properly, who knows??
The cooler is replaced for now with one I made up from parts, which works better and is practically silent, giving me an opportunity to "improve" the SIlvretta..........First thing is that poor base finish...........My method is a piece of machined granite perfectly flat and inflexible, as a work surface, then grades of abrasive paper...........starting at 1000 grit and progressively 1200, 1500, 200, 2500, all lubed with light machine oil.
It is obviously important to keep the base dead flat, any tipping and rounding will be very detrimental.
For the fan, before trying any replacement I will be peeling the label back and trying a drop of oil........( it was starting to be audible)
But I will probably find a replacement fan with more effectiveness eventually.
The Silvretta is just one of many coolers of this pattern, the more expensive of which will already be finished to a higher standard, but essentially the same unit.

What's up with the letter rating system? Is that China desk exclusive or will it be rolled out in all upcoming reviews? Also is there still a giant chart plotted with all coolers tested?

The letters are a china desk exclusive.

There is currently no combined chart available as the coolers we have covered over time have been on different platforms, and thus the results are in no way comparable.
Reactions: Ceros_X

I have a large plot available for the coolers I have tested if you'd like a peek. If you have feedback on the letter rating or other parts of the review I am all ears!

There are many more to add to the list but I don't want to spoil future reviews The sorting is based on how they performed at 4.0ghz with the stock fan at full speed.
Last edited: May 21, 2017
Q

Where am I able to buy the IS-40 v3? I am looking to use it in my upcoming Dr. Zaber Sentry build.

I hope I'm not necro-ing, but.. I have around $20 cashback (they don't expire) in a local online store, so as of now I can get:

Are these good offer?

Or perhaps do you guys know any other low profile coolers which support modern Intel & AM4 sockets? Ideally 45mm or lower.

I'd go for the IS-40 in a heartbeat.
Reactions: ignsvn

In the review, you can see the IS-40 v3 clearly beats the AR-05 in every test I did. If noise is a concern, get the Noctua 92mm slim fan, and you've still paid less than the AR-05, but have a quieter cooler with slightly better performance.

IntoxicatedPuma said:
In the review, you can see the IS-40 v3 clearly beats the AR-05 in every test I did. If noise is a concern, get the Noctua 92mm slim fan, and you've still paid less than the AR-05, but have a quieter cooler with slightly better performance.
Click to expand...

I have no doubt about IS-40 V3's price/performance ratio, especially compared to AR05. Regarding noise, well instead of Prime95, I run stuff like MsOffice, Atom IDE, Apache, Firefox.. considered low loads, so noise is not a concern

It's just that... some case makers here think that people only use NH-L9i thus max 40mm or so cooler height restriction :/
Last edited: Nov 27, 2017 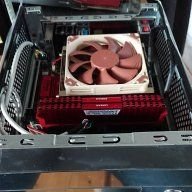 Not 100% sure but this Raijintech model looks pretty similar to that IS-40 also.
Reactions: NinoPecorino and IntoxicatedPuma