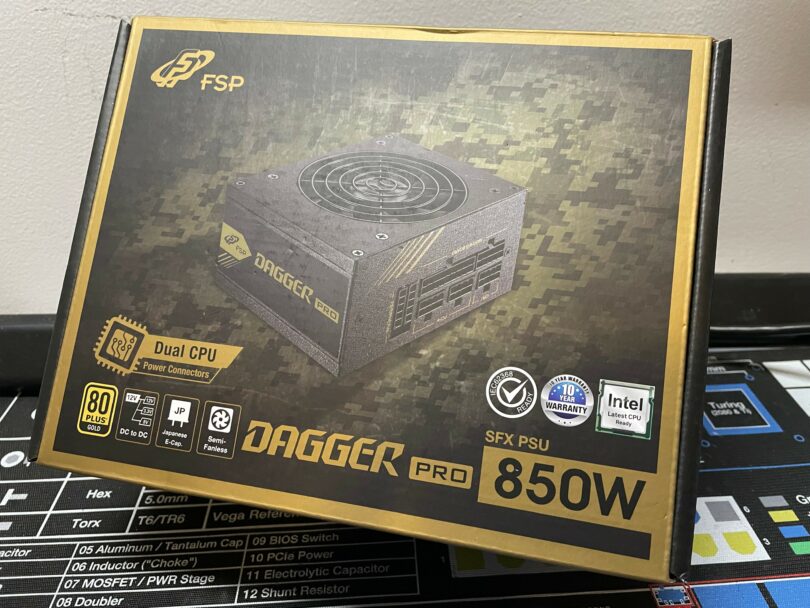 
FIRST LOOK​
FSP. It's not a name I think about when power supplies come up. I'm guessing it's probably not a name that most readers think of. However, I bet you know the names OCZ, SilverStone, Thermaltake, Nexus, Zalman, Antec, and Sparkle. Why do I bring that up?

Every single one of those companies have relied on FSP to design and manufacture power supplies for them.

Let that sink in for just a minute. The OEM for some of the most well known and respected brands is FSP, and FSP has just decided to cut out the middleman and launch their own consumer PSUs. FSP has even launched a new website and brand for their consumer products called FSP Lifestyle.Still, they flew just under my radar that they actually contacted us to review the Dagger Pro. As usual, when a company does reviews the right way, we give them credit. FSP had no strings, rules, or catches attached. They sent us the PSU, and hoped for the best. It speaks of their confidence and honesty. So let's take a first look at the Dagger Pro 850.

​
The Dagger Pro 850 is a standard sized SFX form factor PSU. It comes in a military themed box but has a gold and black theme for the stickers and logos. This is far more subtle than the pure black and white on some power supplies, and should blend nicely with builds. The unit is weighty, and the housing is metal. Inside the box you find a simple paper foldout manual, flat ribbon style power cables, and an ATX to SFX adapter bracket. It's a simple package lacking the decorations of most premium power supplies, and I admit I was disappointed to see yet another premium product coming with flat ribbon style cables. To FSP's credit, these cables are slightly softer and more flexible than those from Corsair, Silverstone, and Enermax. However, PSUs at this price point should include soft braided cables.It makes cabling so much easier in the SFF world.

​
The Dagger Pro 850 comes with all your standard modular connectors. You have four PCIe 8-pin connectors, 24 Pin ATX, SATA cables, combo molex with floppy power, and dual 8-pin CPU cables. Dual CPU 4x2 plugs are a bit of rarity on SFX PSUs so I'm glad to see them considering a 12900K can pull over 300 watts when the limits are pushed.

​
To do a quick function test of the PSU I hooked it up to my CPU cooler test bench. This consists of an Asus Z390i ITX motherboard, Intel 9900KF CPU, and GeForce 730. Upon booting the system I watched the fan in the Dagger Pro spin for a second, and then go off for hybrid mode. I then loaded up Prime95 on the CPU, and Furmark on the GPU. This put a 255 watt load on the Dagger Pro.

Typically, in my experience, most SFX PSUs begin to spin-up their fans at about 200 watts; some extremely aggressively. To my pleasant surprise, the Dagger Pro's fan didn't move. There was no capacitor whine. There was no fan noise. The unit barely even got warm. The loudest thing on the test bench was the Noctua fan on the CPU cooler. This bodes very well for the PSU as in idle, light, and CPU workloads as it will be dead silent. When we do the review we will obviously push a lot more power through the unit, but so far I'm very impressed.

That's going to rap up our first look. Check back next week when I put the Dagger Pro through our closed-case torture rig.

This is great, another viable option in higher power class, and they stuck to standard 100mm length this time instead of 110 like before. Also great news on it being quiet!
Reactions: Phuncz and rfarmer

Power Supply FSP Dagger 600W - A Stab in the Dark?