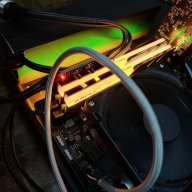 Hello SFF.Net! I'm here with another build log, but this time to document my journey building my black NFC Skyreach 4 Mini. I've had it for just over a year, but it's been a fun case to mod, tweak, and otherwise tune. I just wanted to document the work I've done on it here.

Build Goal: Well, this is a bit complicated. I had a Sliger Cerberus (wonderful case, and I honestly plan to buy a Cerb X when I have an excuse/reason to), but I wanted something more portable. I prioritized build quality and portability when searching for a new case. I have followed NFC for a while and the S4M fit the bill. I know it has its drawbacks, but it makes the most sense as a well made, community supported enclosure.

I decided to go Team Red for this build because I like to root for the underdog, even when it comes to giant corporations. I'm pretty hyped about 7nm fab processes and I hope AMD keep pushing Intel to compete. The novelty of the 5700ITX from Powercolor had its own appeal. A year ago, it was probably the most power efficient gpu in a nearly true ITX form factor at ~175mm long, two slots, and standard height. Add the 3700X 8 cores and 16 threads at 65W thermal design and you have an appropriately powerful system in a small envelope.

For an on the go display, MSI's MAG161V 15.6" portable monitor attracted me the most. It's a name brand so warranty support should be a little better than the generic rebrand imports on Amazon. It's USB powered with mini-HDMI or USB-C input and when folded flat fits perfectly over the S4M in my Wallye Duffel bag.

I'm defining v1 as the build while I was using the HDPlex 400W AC/DC/ATX combo. If you read through the album, I've made some notes on how I built v1. For a while I used the HDPlex in a bricked setup where the AC/DC module was external to the case like a laptop power supply. Eventually I got tired of that and decided to free up a little more desk space. I soldered a GX16 connector and cable for ac/dc connection to the back of the case (NFC offers this through their online shop now). That wasn't too complex of a mod, but it could've ended up way worse. I should've taken both PSU Panels off of the AC/DC module for cutting instead of leaving the one on.

V1.5 was when I got a walnut 3D bezel from Josh. I wanted some wood furniture and extra ventilation and it just made sense to order from Josh.
Reactions: Kormylets and ikara

Not really any changes to computer parts here. Just added a second m.2 drive for games and a fan or two. I purchased a G-Stick Skyreach 600W power supply. Did I need the upgrade? Not really... but it helps keep future upgrade options more open. Plenty of power overhead and more room for bigger GPUs (though I hope board partners start moving to smaller cooling solutions).

Like I said, I didn't really NEED to get a different PSU. But I wanted it for 'future-proofing.' Such a dumb phrase, but that's what it did. 600W in a small form factor that allows for easy GPU installs. Plus if I want to get weird in the future, this makes it easier to externally water cool the S4M. All the power could come from the S4M while the radiator/fan/pump system can sit outside the case. I may never do that... but I COULD if I wanted to.

The G-Stick kind of necessitates a different bezel. You can use the stock 2D bezel just fine by flipping it to where the power button cutout is on the GPU side. You need a power button with longer cables to reach your motherboard's headers if you do that. The other option that I saw people do with their G-Sticks was to use a very flush mount power switch. I wasn't feeling up for that challenge so I took the easy(?) way out and designed my own 2D bezel. I still wanted the slots in front of the GPU. I decided on a different material as well. SendCutSend can do Titanium and so... here it is! The second (afaik) Ti S4M bezel. I flame anodized the cutouts to look like a Titanium exhaust pipe kinda. The colors are a great and actually kinda subtle touch. It was a very fun project and I'm super happy with how it turned out.

I've wanted to try my case horizontally for a while. Although NFC sells their own case feet, my friend gave me the opportunity to buy a slab of walnut from him and I happily obliged. Looking for something to do with it, I decided to make little wooden case feet. The process I came up with yielded okay results, but this would be much easier with a drill press and/or a lathe. I used a hole saw with a 1/4" center bit to drill out the wood. Then I glued on leather washers to both sides and used a threaded insert. Could've used a 9/32" drill bit to fit the threaded inserts a little better but the 5/16" I had on hand did fine. Oiled with Boos Block oil and put to work. Another fun little project for my S4M.

Is there a cable extension i can use for the s4m power button?

Mjmj3318 said:
Is there a cable extension i can use for the s4m power button?
Click to expand...

Maybe? Are you talking about for use in an S4M or in a larger chassis? NFC sells two lengths of power buttons, and you could probably ask them for a custom length one. Otherwise you can find some basic power button cable extensions on Amazon and the like. 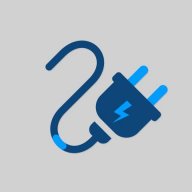 So many cables on the table …

inwave said:
So many cables on the table …
Click to expand...

It's better now, I promise

NFC Skyreach 4 Mini for a noob