First idea:
I wanted a small open air case that would showcase GPU in a nice way. I also hate riser cables, so that was one major reason why I couldn't find anything suitable on the market. After looking for options, I decided to make on myself.

Sizing:
Size of the case is about 21x14x33cm, this is with slim radiator and 2-slot GPU. That translates to about 10L in volume.

First prototype:
I started designing the case in CAD. Created few different rough designs how I want the parts to be placed and chose what I liked the best. I then designed the frame of the case that would support parts where I wanted them, and thats essentially the whole process. I work as laser service technician, so thats what I use for my builds too. I cut first prototype out of 10mm mild steel using nitrogen as process gas.

Here you can see the prototype mocked up using magnets:

Parts attach to each other with M4 screws. I drilled and tapped the bottom plate for this design, but plan is to change this for second prototype to use nuts instead.

Design supports GPU up to about 310mm in length, unlimited width and thickness.

Few problems in the first design... had to grind away some material from the bottom plate because it interfered with radiator.

It fits now, for next prototype I have moved radiator 5mm higher. It may still need grinding with some radiators:

Another problem with the prototype: GPU mounting holes don't line up (used some free GPU model out of grabcad which had wrong measurements). I made a tab that secures GPU in place on this prototype, will ofc be corrected for next cut.

PSU mounts on the bottom, 90degree power cable needs to be used. Orientation can be changed.

I also designed alternative plate so instead of 280mm radiator, it has room for a large air cooler.

Next prototype also has some improvements to help with cable routing, and also it adds a thin cover sheet on rear of the motherboard to hide some cables.

PSU was moved to the side to make room for accessories and cables behind GPU. I made slots for nylocs in the bottom plate to avoid drilling and tapping. This also gives some wiggle room when putting the thing together.

Made a route for cables to get behind motherboard if needed for cable routing.

Radiator was moved 5mm up, fits now without grinding.

Testing some cable routing. Kinda disappointed on Corsair cable kit, I feel like cables are way too chunky and long for SFX PSU. PCI-E cables are long enough to power neighbors card.

Love the raw look of it! Looking forward to the final version.

Maybe could let it get some patina and hook up some Noctuas... 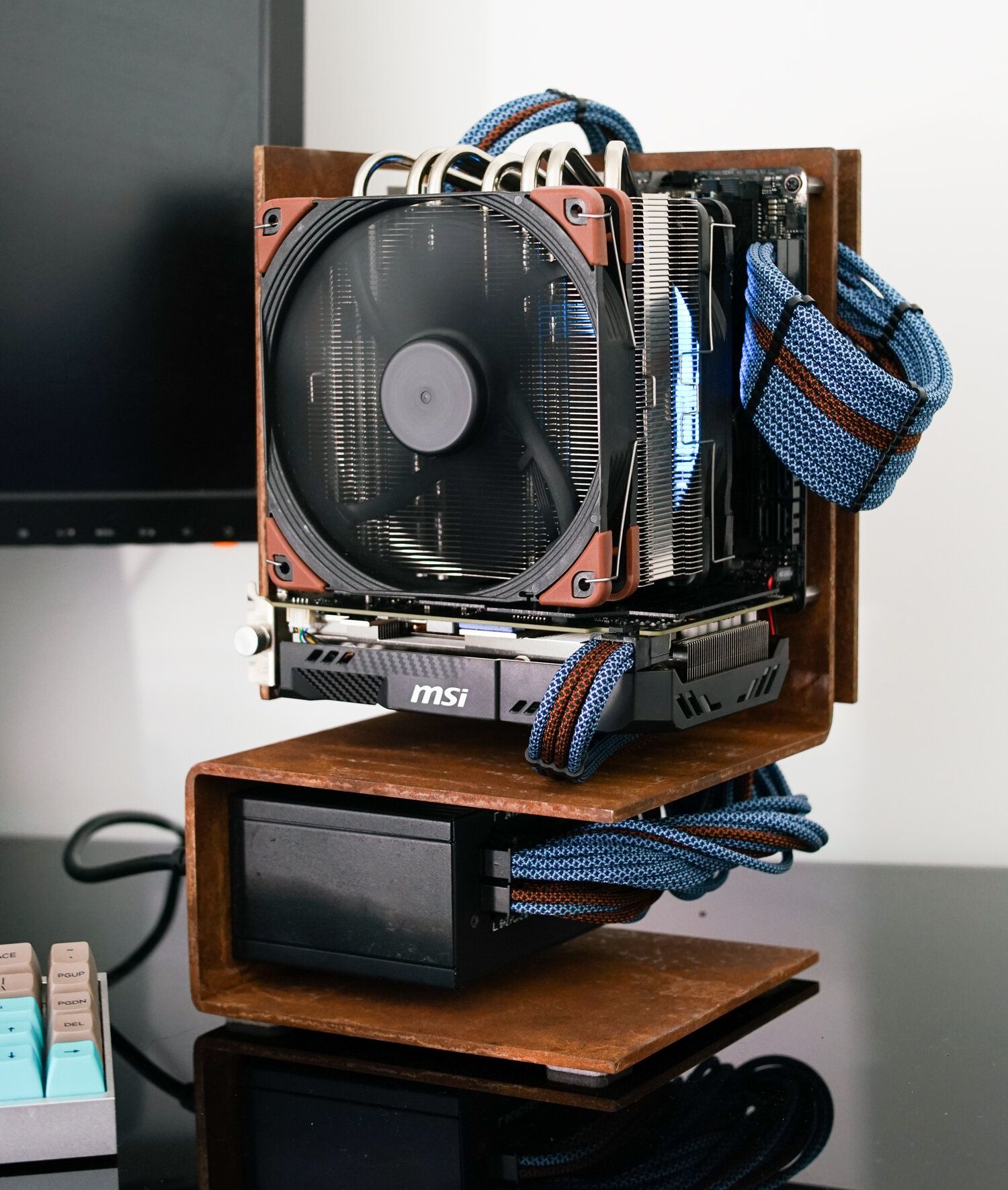 Thanks for the comment!
I have other diy stuff on desk with raw lasercut steel finish so I think I'll keep mine like this. Rust themed build would definitely be cool tho!
Reactions: REVOCCASES
D

And this is how it looks now, First image shows the orientation I'm planning to use it on my desk. These cover sheets are ment to be used only with watercooled GPU, but they would work fine with a blower card too.

Revision 2 has been assembled with water loop. Third revision has been finished in CAD and is waiting to get cut.

Changes for Rev3:
- Revised geometry
- Alphacool XT45 280 rad ordered, ST30 has enough cooling power but multi port rad will help a lot getting air out from the loop
- Water temp sensor ordered
- Aquacomputer Quadro ordered
- Custom PSU cables ordered, they wont be visible obviously but helps the build process.
- Some 90 degree adapters and cables have been ordered to clean out the cabling on top
- Ordered Barrow upgrade fitting for Bykski block. Bolt distance is the same, hopefully water channels fit together also.

And here is same hardware before, I guess its obvious why I started this project. Only mobo and psu has been changed hardware vise.

For a test, I ran cinebench and heaven and tested push/pull configurations for fans.
- CPU/GPU act the same, temp is just depending what the tests are doing when taking the screenshot
- M.2 is behind mobo so its also the same, just heats up slowly by time
- Chipset and VRM are behind the radiator so they should see the change, but its surprisingly small.
* Push config is pushing warm air straight to VRM and Chipset with decent airflow
* Pull is pulling ambient air around chipset and VRM, but airflow is not directed so its weaker
* Fans like push configuration more, with same PWM pulse they spin slightly faster.
= Theres really no difference in this case, its totally different situation than for example AIO and air cooled GPU in closed case.

Allllright, my final build is done. Changes in this revision are listed in previous posts. Main changes happened behind the motherboard, a little bit more room for cable routing and M.2 drive.

All done, rear side:

Right side, with brushed side panels:

Left side, with brushed side panels:

Here's how it looks with my settings:

And here we have unicorn puke with 100% brightness

What will happen next:

I think the desing is not practical to produce in mass, because few reasons:
- It's quite weird and niche style, there would not be enough sales to justify the work that would go into finished and polished product.
- It weighs a lot! Shipping thick steel plates like this around the globe is not practical. Better get it cut at local shop.
- I'm all about making and creating stuff, DIY is the way to go and craftsmanship is the best thing ever!

So what I will do, I will list the files for sale as a digital product.
- You can get the case done all the way to a finished product by your local metal shop. Laser cut, CNC milled, 3D-Printed or whatever you prefer. Mild steel, Stainless steel, Aluminium, options are endless. Laser cut out of copper would be sick!
- You can also just get it cut, and do rest of the work yourself like I did.
- You can even modify the files to better suit your hardware, or put your own logo on the side panel, or what ever you want!
- If anyone decides to go for it, I would love to see how your build went and how it looks!

I'll post the link for the files here when I get it done.
Reactions: ParallaxStax, REVOCCASES, Allhopeforhumanity and 2 others
D

Allright, heres the files if anyone is interested. If any questions pop up, feel free to post here or email me through etsy.
Plan is not to get rich with this, its just a small contribution for the creator and also etsy is a nice platform to share this.
If you feel like its not right time for this now, feel free to download the files and save for future use. 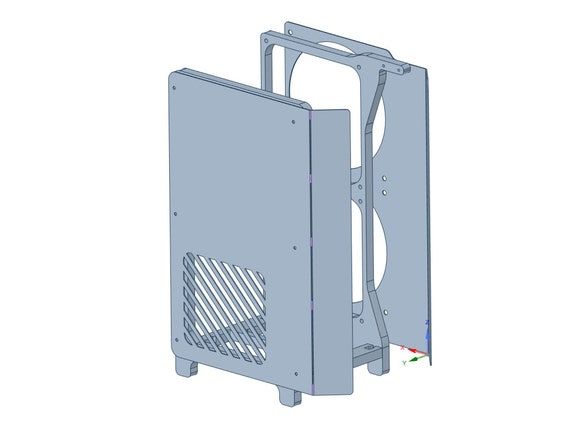 DD-ITX is a computer case that I made for myself. Here you have possibility to buy cad drawings from me, and create similar case for yourself! My case was laser cut out of 10mm mild steel and 1mm mild steel. To finish the product you need to tap few threads for standoffs etc. Also some basic

Concepts Today at 11:15 AM
thelaughingman