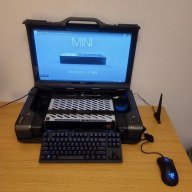 This was an extremely challenging build to say the least. I deploy for the military and I my laptop just wasn't giving me the gaming satisfaction I was looking for on the road. I set out to find a portable, durable setup that could shred through every game out there. I wasn't even thinking about this process until I came across a used GAEMS Guardian Pro XP for $300. I just couldn't justify the $700 mark for a 60Hz 1440p monitor. Once I had that I started doing a lot of research for the case. I had seen Linus review the S4 Mini in the past and wanted to build a computer in it ever since. I was thrilled when I measured the GAEMS and found it could fit. My video card research led me to the Zotac 2070 Super since it had the form factor I needed and didn't break the bank. I paired that with a Ryzen 5 3600 because it was the cheapest option that would provide enough performance without bottlenecking the video card, and at 65w it wouldn't put too much draw on the power supply. I topped it with a Noctua NH-L9a chromax black cooler. For memory I went with a 16GB G Skill kit clocked at 3200 since that was the limit of the 3600 and 32GB really isn't necessary for gaming. I really wanted to have WiFi 6 capability so the ROG Strix X570-I was the clear best choice motherboard. I threw in a Intel 660p 2TB M.2 SSD for now until I fill it up. Of course for power supply the only option was the HDPlex 400W AC/DC combo. I initially wasn't planning on brickless but the AC-DC converter was just too ugly and bulky for me to justify carrying around.

I did not know how much of a challenge it was gonna be to fit all of this inside of the S4 mini, the cable management was a nightmare. I had to depin the 8-pin CPU connector at the power supply side and bend them 90 degrees to fit properly. I used 2 90 degree turn molex adapters for the gpu side of the power connectors. I also had to grind back the heatsink on the DC-DC converter to get proper clearance for the GPU connectors. I shortened the Power supply side of the GPU connector with some environmental splices just for aesthetic purposes since that wire is way too long. The AC-DC converter needed some additional persuasion to fit properly into the side of the S4 mini. I had to slightly drill into the holes where it mounted in order for the screws to mount flush with the case. I bypassed the connector to the power cord with some environmental splices just to clean up the look. This unfortunately prevented me from mounting the power button where it is cutout on the front of the case. I ended up relocating it to the side by drilling a new hole, which led me to modifying the silver pieces of the case by grinding the corners away until the power button had room. By far the biggest challenge though, was the motherboard connector. 12 inches was all I needed(that's what she said), but the male to male connectors that come with the case and power supply were all too short and anything longer was just too much to fit. I was able to find the right length in a modular power supply 24 pin extension cable but it was male to female. I didn't have time to order a custom cable since I was deploying in a week. So I ordered Molex pins, a crimper, and a blank male connector and got to work. I do not recommend depinning and repinning molex connectors unless you are an extremely patient person. I depinned the female side, cut all of the female pins, and repinned them all with male pins then reseated them all in the new connector, only for it to fail. I realized that I had mirrored the pins when they needed to be reversed to be pinned properly, so I painstakingly undid all of the work I had just done and redid it once more the correct way. Finally my work had paid off and it was glorious. I hope you all enjoy the end result and hopefully someone else is crazy enough to one up my build in the future.

Advice Molex modded to a 8 pin?