A30 - Journey to Budget/Beastly SFF

May be a little long for most. And pics tomorrow and wednesday when parts come in.

It all started in 2016. I started lurking around [H] Hot Deals and just happened to stumble across an amazing opportunity at Best Buy. The 1080 was new and they mistakenly put the 1070 price on it ($449 at the time). I was still stuck on GTX 670’s. I could be set for years on the gpu side of things. I HAD to get this card. Rushed down to Best Buy just minutes before GMs started getting calls about the error. SCORE!! (I really hope that guy didn’t lose his job though)

Fast forward to today. Just like many of us in this small community, I had the itch to upgrade. Like a junky, I needed some new parts but my rig is still a beast. I start lurking forums again. “Ryzen 1700 $159.99”…FML. What the hell am I supposed to do with this thing now. I guess I could use a 1080p gaming/Plex rig and that shouldn’t be too expensive right? The journey to a budget SFF begins.

Reading the interwebs im realizing going small isn’t cheap and it has to start with the case. Indie case makers are pumping out some beautiful designs. Dan, Saber, NFC, N1, the ghost etc. But these are pretty expensive and not readily available to the masses. I see some have gone overseas to find something comparable but even those are close to the same price and who knows when they’ll ship. Then there’s Geeek. Never heard of em until someone mentioned something on reddit. Nice, simple cases with a clean design. Even with ridiculously fast 3 day shipping from Taiwan, you’re looking at around $80 with a psu cover. Its go time!

Now is where the patience had to come into play. Im not spending $1k on a plex rig that I might game on. Over the next 2 months, here is a list of what I managed to find using forums, reddit and ebay deals (they had one every 2 weeks it seemed!!)


Sure, theres a few issues with this. I cant check to make sure these items aren’t DOA since I don’t have all the main parts. Luckily, the deals for the cpu and motherboard were from newegg so ill have the warranty. The 1060 was probably more than I needed but again, ebay had a sale knocking the price down to what I probably would have paid for a 1050ti. DDR4? Hell, I just got lucky checking facebook marketplace. It shipped today so we’ll see if I get a box of rocks or not (im covered by paypal if so) The PSU? Going this cheap, I can live if it were to fail on me. M.2? Probably not the best but it gets around 2GB/1GB and its cheaper than a comparable Samsung. Each item purchase I can verify if you need proof. IT CAN BE DONE!

Some items are still coming in and maybe I’ll post pics tomorrow but for those in the market for parts, planning and patience. Use these forums. Check em like Wilford Brimley checks his blood sugar! 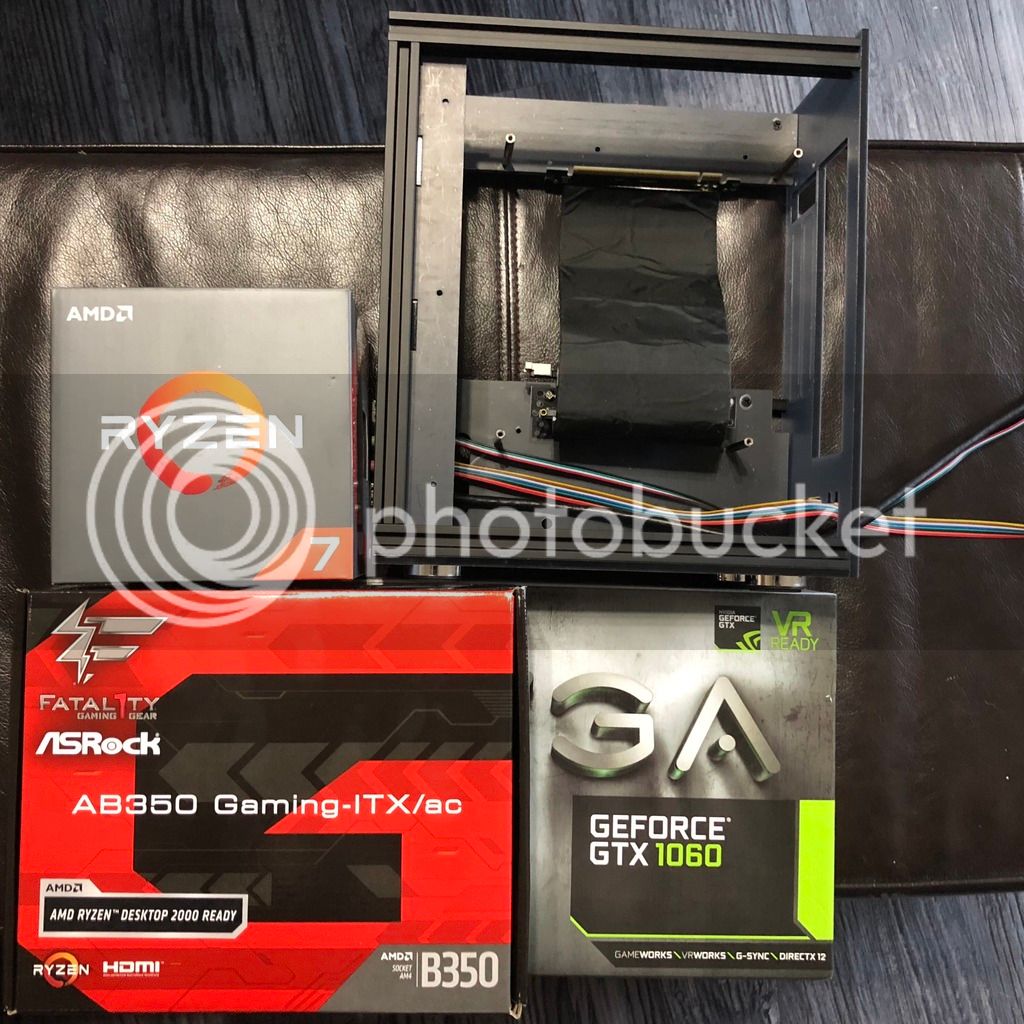 Cant believe how small these things can get

OOOOOOOH. That mobo box is only slightly smaller than the case....
M 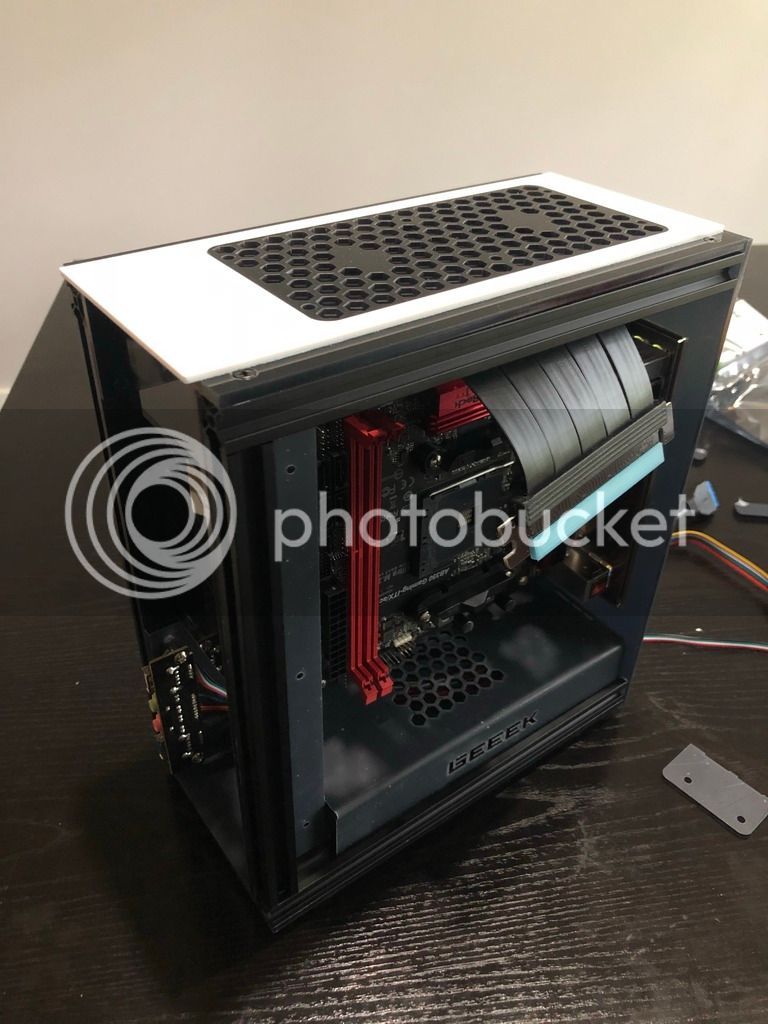 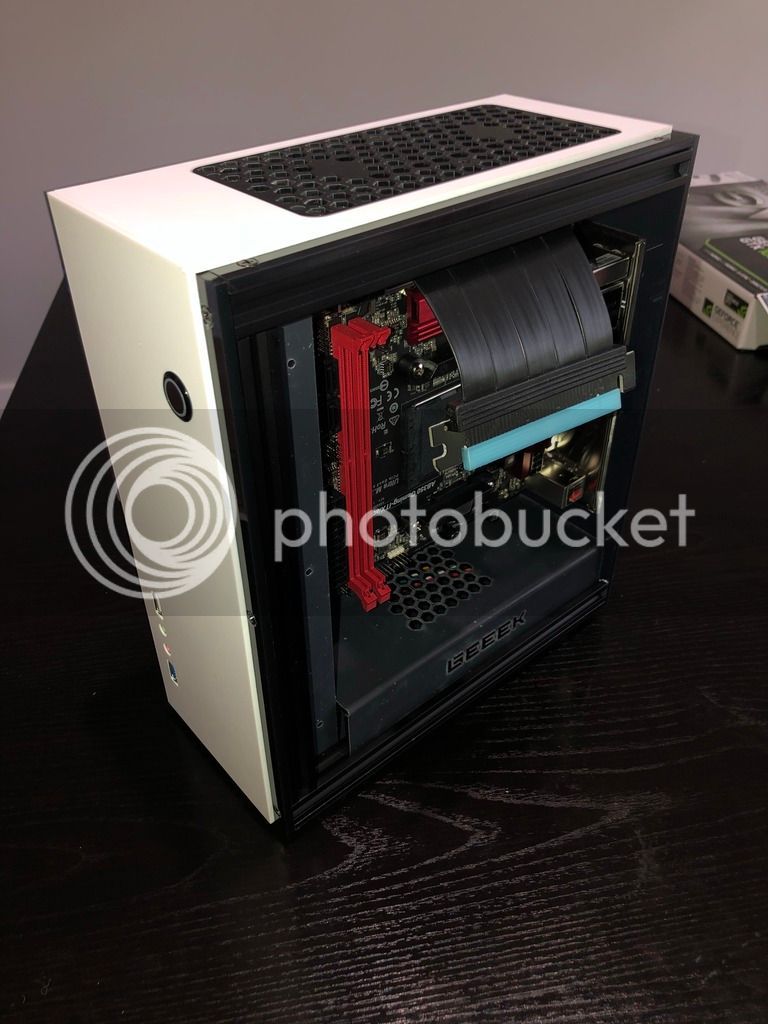 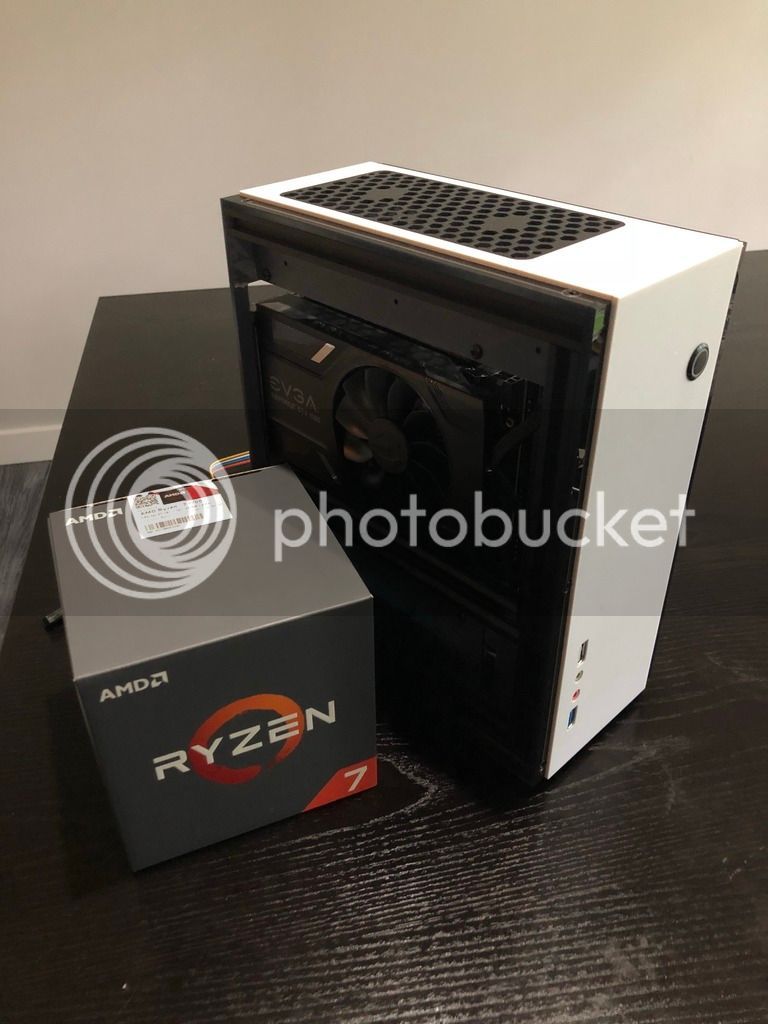 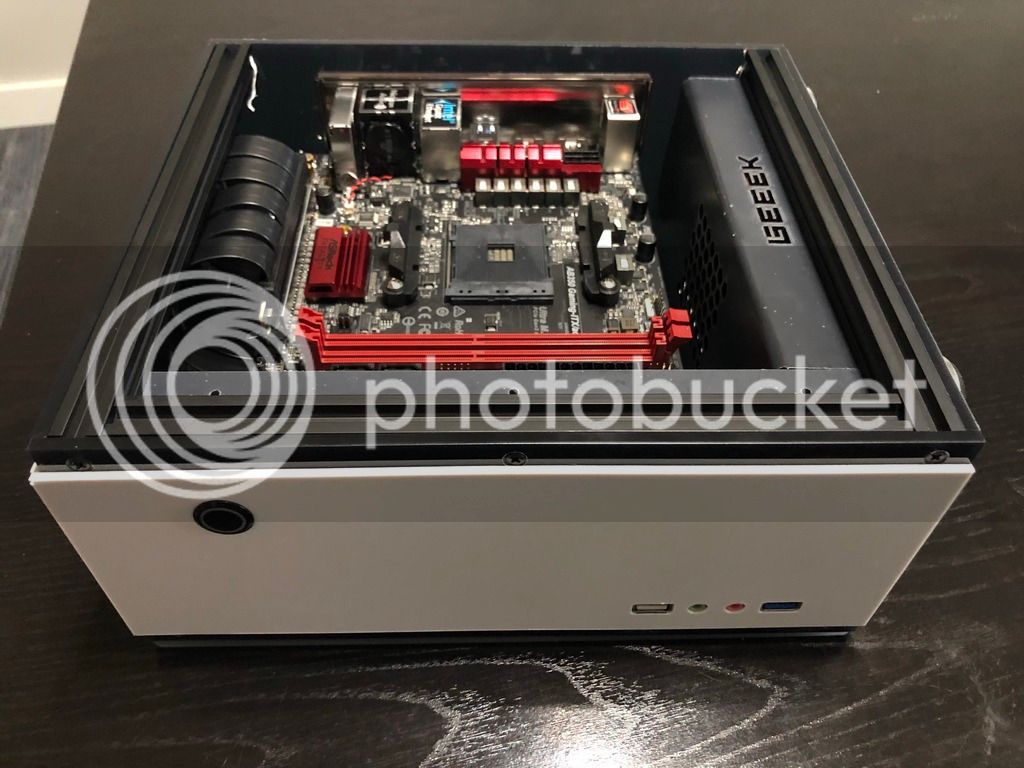 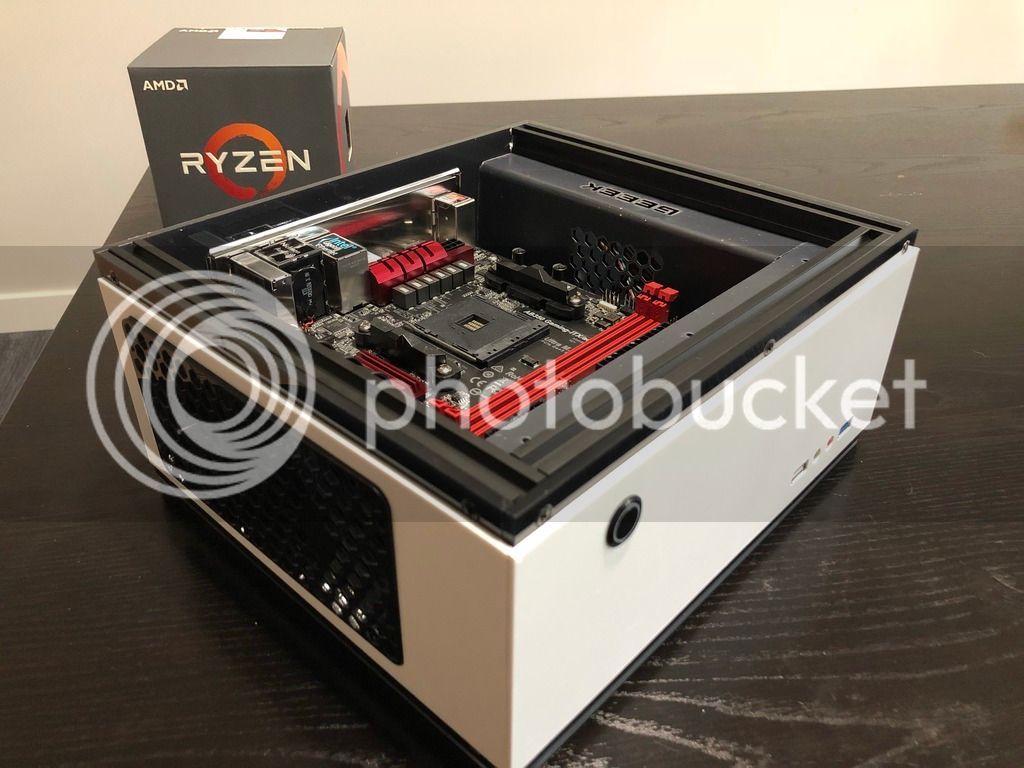 Yea some edges arent perfectly aligned but nothing noticeable. Havent taken off the plastic so it may look a little dull. Wasnt shooting for black white and red but thats how its gonna turn out. The ram (at least what i say on the add) has big red heatshields soooo, yea. Easily the smallest build ive tried. Node 202 has nothing on this size.

So here was the marketplace ad... 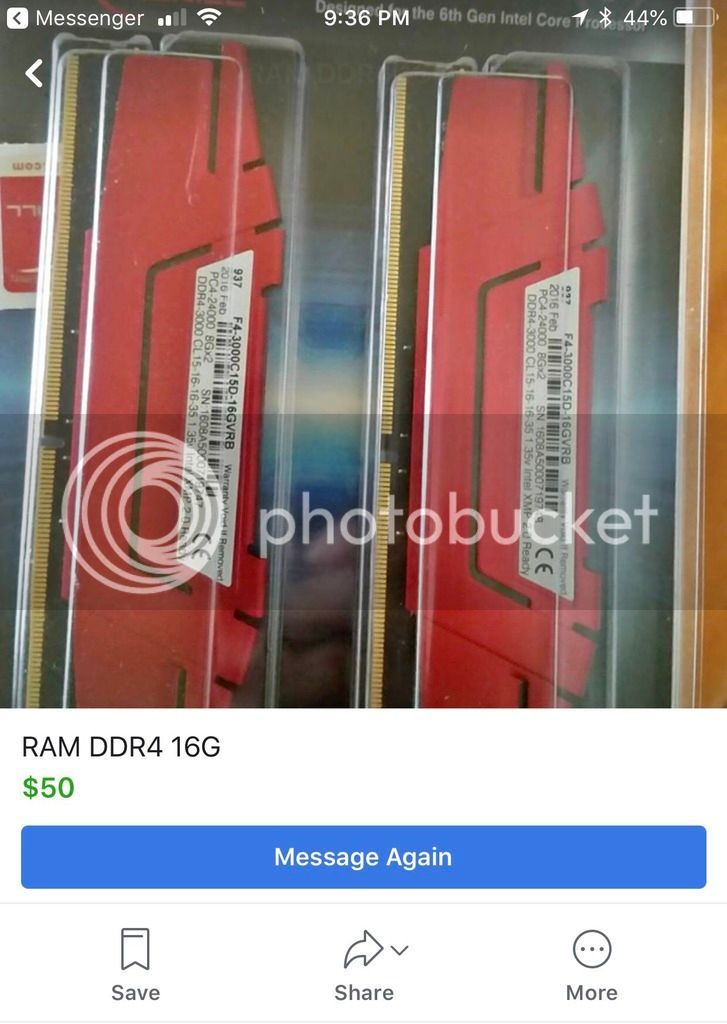 And here they are. Brand spankin new for $65 shipped. I dont ask questions. 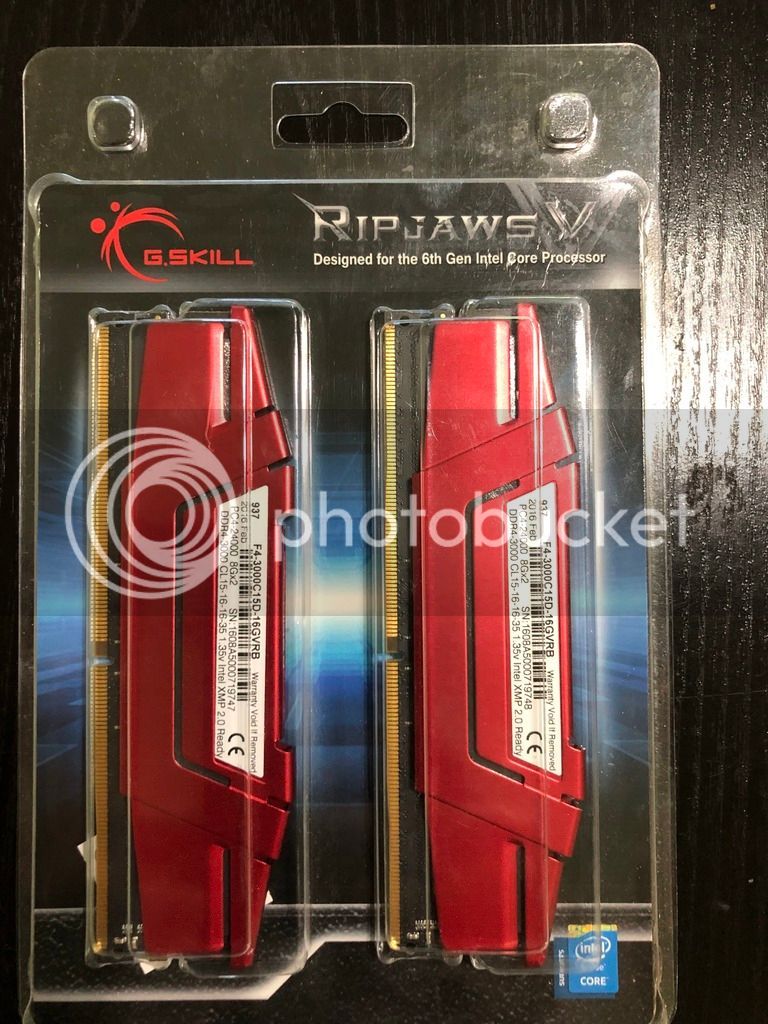 Obviously everything was going to be tight especially without a modular psu and ketchup and mustard cables. But its all in, with 2 80mm fans up top, ram at 3200, one hdd in front, the other hdd will be on the side on monday (cables ready to go). Shes tiny and shes quiet.

To do list if i feel the need to spend any more. Switch to an HDPlex 400 and a sleeved cable kit from amazon. They have some cheap ones that'll look just fine. 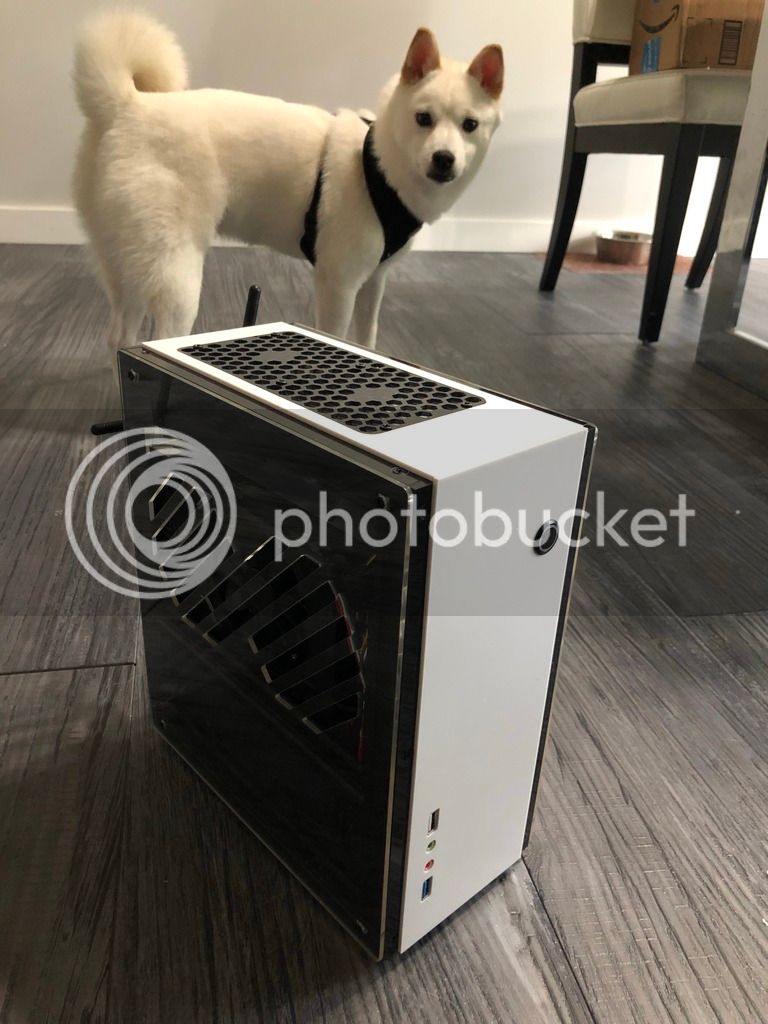 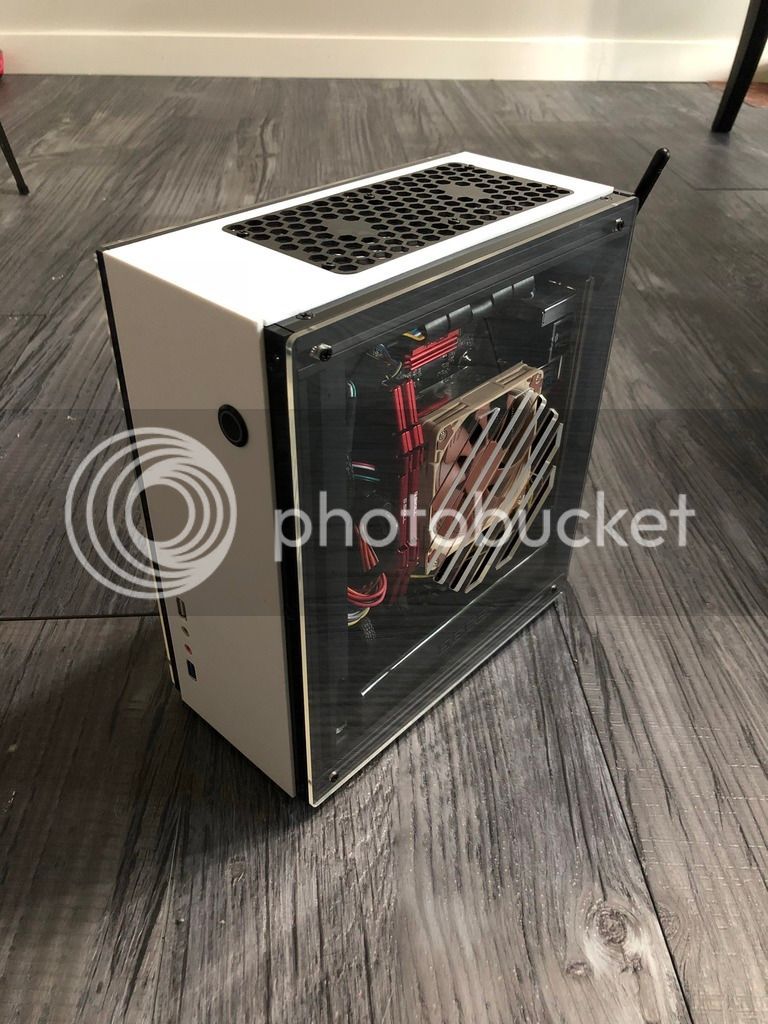 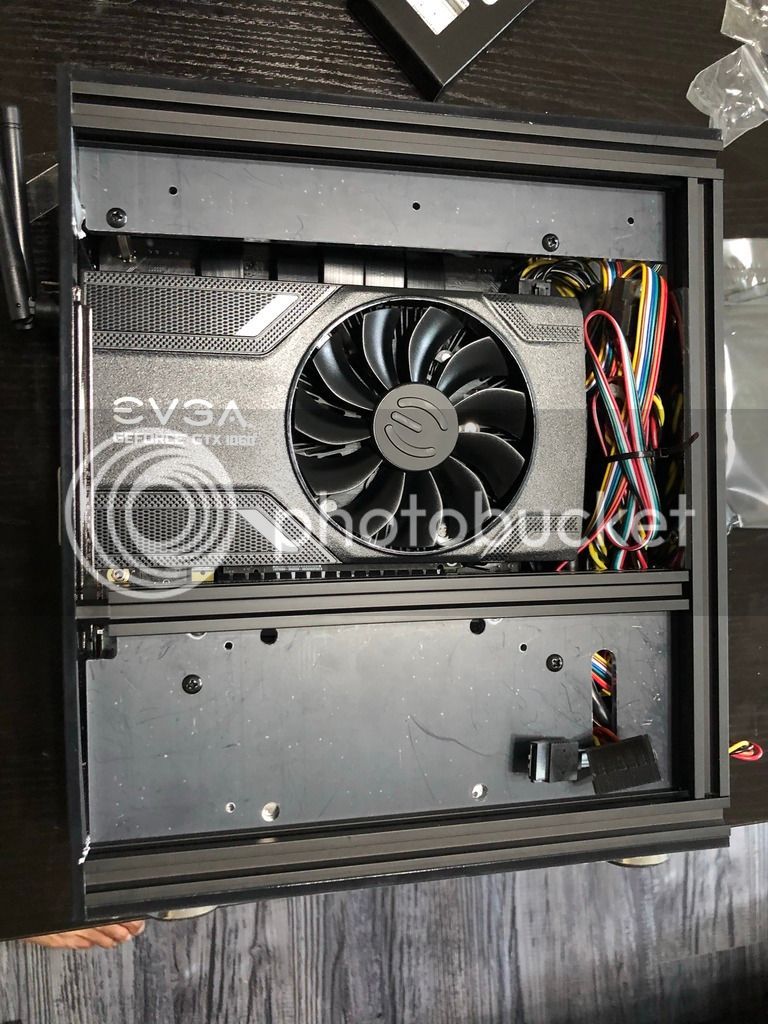 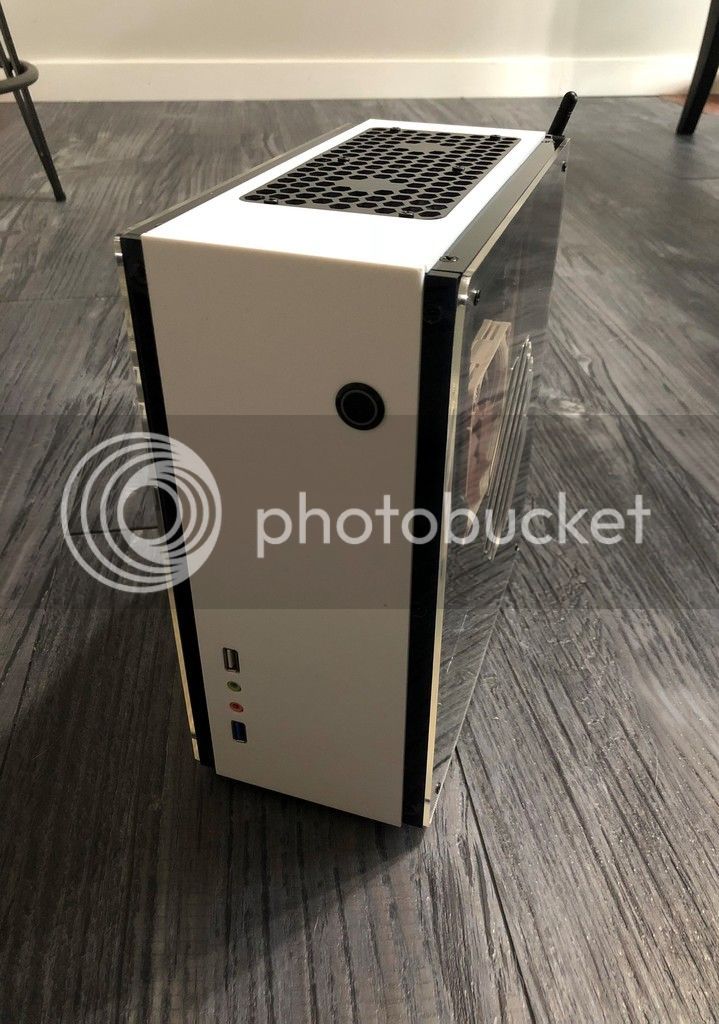 That is a nice little build for what you spent, I still can't believe that deal you got on the ram.
M

Got lucky. It was up for 12 hours at the time. Shot that message over and offered 60 shipped, plus 5 for paypal fees. Then prayed.

MMFC378 said:
So here was the marketplace ad...

And here they are. Brand spankin new for $65 shipped. I dont ask questions.

That kind of deal is SO unfair. Why didn't I get it? LOL.
I

Great looking build! How are the temps with that cooler? I am looking to do pretty close to the same set up but with a 1700x I picked up for cheap. Also do you know how thick the 2.5" drives can be? Wondering if I can fit one of the thicker 5TB drives in there.

I thought all 2.5s were the same thickness. Definitely cant do a 3.5 on either the side or front. If there’s a 2.5 that’s a little thicker than an ssd, it should work behind the front panel.
I

Great! I should be ordering mine in the next few days.. Just trying to get all the information on it that I can first. As far as the drives that I am talking about this one is twice as thick as a normal laptop hdd/ssd:
https://www.newegg.com/Product/Product.aspx?Item=9SIA8S17F45933
compared to something like this:
https://www.newegg.com/Product/Product.aspx?item=N82E16822179107

I agree with the color on the redux, it will look much nicer!
M

First one won’t fit. Second one is only 5400. Whats it gonna be used for? What’s your boot drive?
I

I plan on using StoreMI https://www.amd.com/en/technologies/store-mi. I am wanting to put in the largest spinning disk I can fit, which it looks like is a 2TB drive, and my 256GB intel 600p SSD. The technology looks pretty cool! Just trying to get as much performance as I can for the $